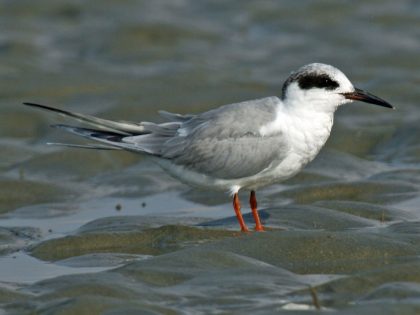 Edited from a version published in August, 2017

by Greg Hanisek
Forster’s Terns, one of four medium-sized terns that occur in Connecticut, can be found at any coastal location, as well as the lower Connecticut River, at the appropriate season. They turn up rarely inland, not unexpected since a large portion of their population breeds in the prairie potholes region of the U.S. and Canada.

In the east, Forster’s Tern is a regular breeder as close by as southern New Jersey, favoring saltmarsh habitat. It has nested rarely on Long Island and at least once in Massachusetts, but never in Connecticut.

Of the four mid-sized species, we’re preparing for our two breeders — Common and Roseate Tern — to clear out. But at this stage of the year we’re just entering prime time for Forster’s Terns. The other three species, our breeders plus Arctic Tern, are long-distance migrants that make an early exit from North America.

Arctics migrate far offshore, and as a result are extremely rare at any time in our state. Forster’s are different. They winter as far north as the southeast coast of the United States, and in most years some remain in Connecticut waters into November.

Mid-summer through autumn produce the most records, but occasional spring appearances are noted. Late dates most years are early to mid-November. An example of occasional triple-digit counts is 150 off Cornfield Point, Old Saybrook, on Oct. 4, 2015, by Nick Bonomo, one of our other Bird Finder authors.

What It Looks Like: The medium-sized terns all look very much alike. They present one of Connecticut’s real identification challenges. Forster’s Tern is a welcomed exception, because at the time that it’s most numerous in Connecticut, it has molted its look-alike black cap and acquired a distinctively shaped black mask.

Identifying spring birds requires close attention to overall plumage tones, and the characteristics of the wings and tail. Variability in bill color makes this a less reliable character than older field guides suggested.

Conservation Status: Only populations around the Great Lakes have federal designations – Special Concern in Michigan and Minnesota, and Endangered in Wisconsin and Illinois. Management plans in Wisconsin have included placement of 60 × 64-cm wooden platforms to serve as artificial nesting sites (Birds of the World Online).