Sign up for Thursday’s Shorebirds of Connecticut presentation via Zoom, by Manomet’s Brad Winn. Reserve a spot here.

Edited from a version published in May 2017

by Greg Hanisek, editor of The Connecticut Warbler
White-rumped Sandpiper is an uncommon species in Connecticut, but one that can be found with some reliability. It favors coastal shorelines and mudflats at the state’s top shorebird stopovers such as Milford Point, Sandy Point in West Haven and Hammonasset Beach State Park in Madison.

White-rumpeds are regular in both spring and fall migrations going to and from their Arctic breeding grounds.

In southbound migration they occur over a broad time frame, from mid-July to well into the fall season, some lingering into November. They follow the typical fall shorebird scenario, with molting adults arriving first, followed later by the fresh-plumaged juveniles.

In spring they arrive during peak shorebird migration in mid-May and often linger til the end of the month and into early June.

The White-rumped Sandpiper is one of nearly 20 species in the genus Calidris that have been found in North America. These include notoriously tricky identification problems such as the five small North American species known as “peep” and their small Eurasian counterparts known as stints.

The White-rumped, one of the “peeps,” fits the basic sandpiper plumage pattern, but in spring it’s the largest “peep,” with long primary flight feathers that give the species an elongated look. In fall, the size and shape are matched by Baird’s Sandpiper, but the White-rumped is unique in the presence of the eponymous white rump (a feature best seen when the birds are in flight).

This small Nearctic sandpiper migrates from its principal breeding ground in the Canadian Arctic to the southern extremities of South America, one of the longest animal migrations in the Western Hemisphere.

Much of its migration is made in a few, long, non-stop flights, each of which can last as long as 60 hours and transport these birds up to 4,000 kilometers, powered by extensive body fat. Such fat reserves are laid down at key migration staging areas — wetlands where food is especially abundant — making this bird particularly vulnerable to loss of strategic habitat.

This need for key staging areas is what makes Connecticut’s beaches so important. White-rumped Sandpipers and other shorebirds need room to eat and rest without being disturbed, in order to have energy for their journey.

Southbound migrants fly over the Atlantic Ocean from northeastern North America to northern South America, and then gradually move southeast along the coast before turning inland in trans-Amazonian travel of about one month. Northward migration from Patagonia is apparently similar, at least through South America; the birds then move across the Caribbean and through interior North America to arctic breeding grounds (Birds of North America Online). 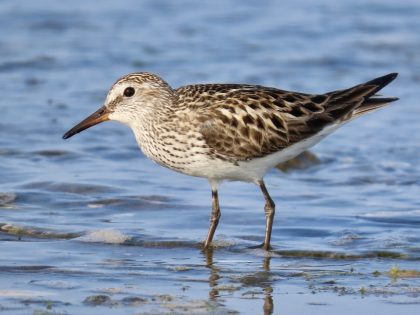 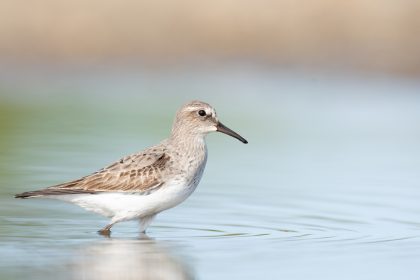 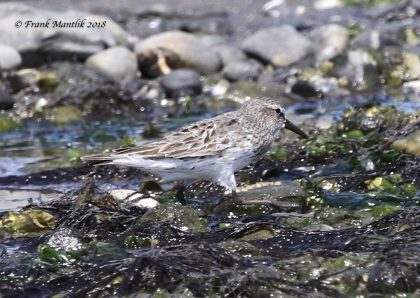