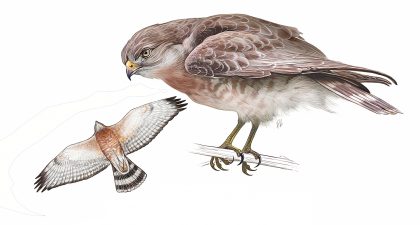 Edited and updated from a version published in September 2017
by Michael Aurelia, former members of the Connecticut Audubon Society’s Board of Directors
The Broad-Winged Hawk is small, compact raptor with chunky body and large head that is distributed throughout Connecticut wherever relatively large tracts of forested land are present. These forests can be either deciduous, or mixed with conifers.

Broad-wings are the smallest of the buteo hawks breeding in Connecticut. Individual hawks weigh a little more than a Fish Crow and are about the same size.

During breeding season, the hawks can be difficult to find because they spend most of their time underneath the forest canopy chasing their prey from perches. Their call is a short, high pitched whistle that lasts 2 to 4 seconds with a short first note and longer second note: kee-eeeee.

During fall migration, if you’re in the right place, it’s almost impossible not to see them.

What it looks like: According to Cornell’s online ”All About Birds,” the adult Broad-winged Hawk has a reddish-brown head with barred breast and a distinctive square tail with broad black and white bands. Juveniles are lighter brown with coarser streaking on the breast and the tail is narrowly banded. The birds are quite a bit smaller than our other common buteos: Red-tailed and Red-shouldered Hawks.

Starting in late August, hundreds of thousands of Broad-winged Hawks leave northern forests to head for their wintering grounds in Central and South America. Look for them on almost all ridge lines where the birds can find thermal winds to give them the necessary lift to form large kettles and soar. Go to any local hawk watching site and be prepared to see as many as a thousand or more broad-wings soaring by each day.

Of course you can still find the most recent reports of a broad-wings by going to e-Bird.org. Click Explore Data, then Species Maps and insert Broad-Winged Hawk. For the date chose year around current year; for location, Connecticut.

During the breeding season look for Broad-winged Hawks to be nesting in the forested areas in both the northwest and northeast corners of the state, but they nest in other parts of Connecticut as well.

Broad-wings have a diverse diet and eat small mammals, amphibians and a wide variety of insects and crustaceans, which they catch on the forest floor, usually near a waterbody or opening. Some breeding pairs can stay together for multiple years while others select new mates every year. Serious predators include other buteo hawks, raccoons, porcupines, American crows, Great Horned Owls and black bears.

The Broad-winged Hawk’s status in Connecticut can best described as stable. As forest habitat returned to Connecticut over the last century, the hawk’s numbers have increased. The key to protecting this small buteo is to conserve large forested tracks near wetlands and watercourses. On the national level the IUCN indicates the Broad-winged Hawk’s status is of Least Concern, with the population trend stable or increasing slightly.