A Tiny Butterfly, a Secret Location, and Seven Volunteers to Improve Its Habitat 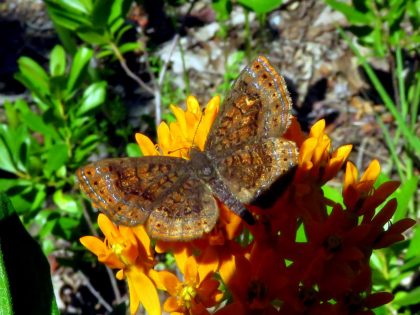 ” The Northern Metalmark is small but subtly beautiful. … It appears a drab brick red-brown with white lines and black spots, but when viewed at the right angle and in the right light, the browns morph into a bright metallic bronze and the white lines into brilliant metallic silver.” Photo by Patrick Comins.

by Patrick Comins, Executive Director
October 3, 2020 — On a recent Saturday, I joined a work party to help restore habitat at one of only two places in Connecticut where the highly endangered Northern Metalmark butterfly (Calephelis borealis) can be found.

Both of those locations are tiny, and on private property. The owner of this site is dedicated to conservation, and the site is not in danger of development. It has however become overrun by invasive plants over the years, and succession is beginning to shade out the host and nectar plants the Northern Metalmark relies on.

The Northern Metalmark is small—only 1-inch across—but subtly beautiful. It appears a drab brick red-brown with white lines and black spots, but when viewed at the right angle and in the right light, the browns morph into a bright metallic bronze and the white lines into brilliant metallic silver.

It is classified as endangered in Connecticut and is in fact one of the most highly endangered species of any kind in the state. It is of global conservation concern and threatened throughout its range, being scattered in mostly small isolated populations from Connecticut to the central Appalachians and Ohio River Valley, and in southwest Missouri and eastern Oklahoma. The Northern Metalmark is closely associated with the alkaline soils of limestone barrens and serpentine shale where these geological features overlap with open woodland streams. 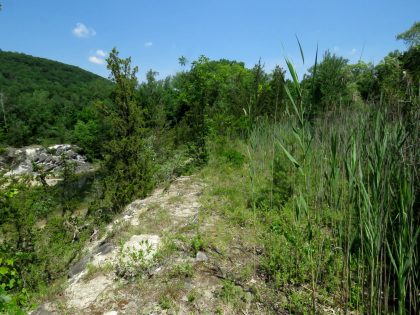 Given the extremely sensitive nature of the habitat, and the endangered status of the butterfly, we all agreed to not even divulge the town in which this population is located.

The Northern Metalmarks’ host plants are roundleaf ragwort (Senecio obovatus) and they winter-over as caterpillars on the undersides of the leaves. There is a short flight period between mid to late-June and early to mid-July. The adults feed on the nectar primarily of black-eyed Susan (Rudbeckia hirta) and butterfly weed (Asclepias tuberosa). Connecticut Audubon donated several butterfly weeds to plant after the invasives were cleared for this effort.

Seven volunteers spent about four hours cutting back Phragmites and other invasive plants, and cutting small trees to let more sunlight into the tiny, glade-like habitat. We’ve offered to send some of our sanctuary staff for a follow-up to remove larger trees. The entire size of the habitat at this site is only about 100 feet by 30 feet or about 1/10 of an acre—smaller than a little league baseball infield. The population of butterflies here ranges up to about a dozen adults, but in some recent years no adults had been observed, which had led to worries that the population had winked out.

Luckily this summer featured a good flight with at least 10 individuals seen.

With the glade restored and expanded and additional nectar plants added we are hopeful that the population will expand. In addition to the metalmarks, this site hosts some unusual (and beautiful!) plants including fringed gentian (Gentianopsis crinita), Grass-of-Parnassus (Parnassia glauca) and New England blazing star (Liatris scariosa var. novae angliae); a state species of special concern in Connecticut.

It’s true that Connecticut Audubon is recognized as a bird conservation organization. But we are just as interested, and often just as active, in the conservation of other taxa as we are in the state’s amazing variety of birds. 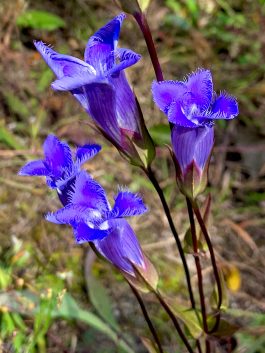 You can help. If you’re interested in bird or butterfly conservation, consider making a donation or becoming a member. Your contribution will go directly toward helping birds, butterflies and other species of conservation concern. You can also sign up for our conservation advocacy alerts and make your voice heard when important issues arise or learn about opportunities to volunteer on habitat management efforts. To learn about future volunteer efforts, sign up for our newsletter.