Not a quail. A Yellow Rail.

October 20, 2020 — A neighbor carried a box up the stairs and onto the porch at the Milford Point Coastal Center last week and told the staff it held an injured quail found on Naugatuck Avenue, one of the area’s main roads.

The center building was closed because of the pandemic, but Louise Crocco, the center’s office manager, was there, and so was Stefan Martin, a staff naturalist.

Louise opened the box. Out fled not an injured quail but, as Stefan reported it in a cable-like text: “YELLOW RAIL … it flew out of the box and is now near main entrance on ground under porch.”

To get an idea of just how astonishing this was, take a look at this eBird map on the right to see the rarity of Yellow Rails in Connecticut. Six pins in all (and one further east, in Stonignton) two of them from the 19th century. (See below for a historical footnote.)

The red pin is the Coastal Center. Frank Gallo, Jim Duggan and several others saw a Yellow Rail there in 2004: “To our amazement,” Frank wrote on eBird, “the bird flew in from the ocean side and crash landed in a rose bush just east of the platform. It fell through the foliage down to the ground where it stood dazed for a minute or so in plain view…. Bird ran off into dense cover.”

Nick Bonomo heard a Yellow Rail in Old Saybrook last year. Between May 9 and May 25, 37 people went to hear it and put it on their eBird checklists (Yellow Rails call late at night or early in the morning). None of them actually saw it. Rails are not known as secretive marsh birds for nothing.

Here’s what Birdsoftheworld.org says of Yellow Rail: “It is extremely difficult to observe because, like other rails, it prefers to run or hide instead of flying and commonly moves beneath procumbent vegetation. … ‘the Yellow Rail is much more like a small mammal than a bird. It slips silently through the grasses like a phantom, barely keeping out of the way of one’s feet. The observer may be within inches of the birds and yet never catch a glimpse of them.’ ”

This link will show you a map of where Yellow Rails breed, over-winter, and migrate. Not surprisingly, it does not include Connecticut.

A handful of birders showed up at the Coastal Center with their cameras to see the rail last week. Some of those people had driven to Old Saybrook last year and heard that bird, but had never laid eyes on one in Connecticut. At the Coastal Center, the rail hunched under the stairs for a couple of hours. Finally, it made its way to the marsh, watched over at a respectful distance by a phalanx of amazed birders.

There’s no telling what would have happened to the rail if it had been left on Naugatuck Avenue, and Connecticut Audubon strongly discourages people from bringing injured or orphaned animals of any kind to its centers (we are not licensed to care for them).

But in this case we’re hopeful that the Yellow Rail found safety in the Coastal Center marsh.

Historical footnote. The two 19th century observations in eBird were from New Haven in 1876 (the observer was “Merriam”) and from Bridgeport in 1883 (the observer (the observer was “Averill”).  A researcher found the reports in a 1914 publication called “Distribution and Migration of North American Rails and Their Allies,” Bulletin of the U.S. Department of Agriculture No. 128, and added them to eBird.

In the collections at the Yale Peabody Museum of Natural History in New Haven there are at least 10 Yellow Rail specimens, according to Richard Prum, the Peabody’s curator of Ornithology and head curator of Vertebrate Zoology. “Mostly from New Haven County and collected by George Grinnell in the 1870s,” he said in an email. — Tom Andersen 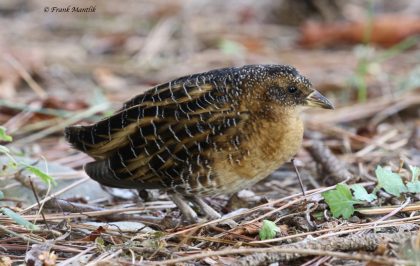 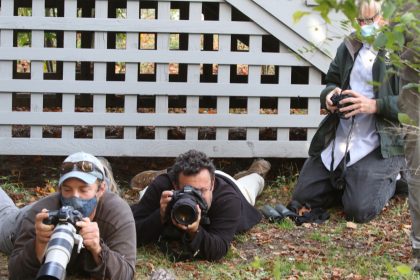 Photographers laying out to get a good shot. © Frank Mantlik 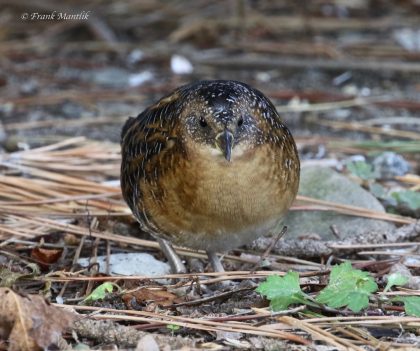