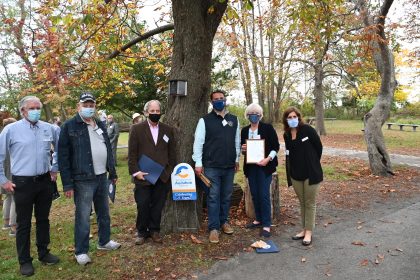 The Connecticut Audubon Society celebrated the 25th anniversary of its Coastal Center at Milford Point with a small gathering of dedicated friends, neighbors and supporters on Wednesday, October 21. The afternoon, outdoor event was the kick-off to acknowledge a milestone that will be recognized with other events and activities in the year ahead.

Against the background of the Charles Wheeler Salt Marsh and Wildlife Management Area, Milford Mayor Ben Blake presented a proclamation affirming the Center’s “esteemed services for the past quarter century.” In his remarks, Blake emphasized the value of Connecticut Audubon’s presence in the Milford community saying, “The Coastal Center has been a treasure for kids and students of all ages.”

Connecticut Audubon’s Southwest Regional Director Shari Greenblatt expressed disappointment that, “due to the pandemic, we could not invite all our members, volunteers and supporters to be here today to thank them in person for all the ways they have contributed to the Center’s growth and success. The Coastal Center is a gem in Milford that we are very proud of, but it’s taken the work of many people to achieve this together.”

During this anniversary year, the community and Connecticut Audubon supporters will have additional chances to participate in the celebration. Announcements will be made soon about an upcoming photo contest in partnership with Milford Photo, and a “25 for 25 Fundraising Campaign.”

For 25 years, the Coastal Center at Milford Point has educated children and adults, promoting awareness and fostering the preservation of Long Island Sound’s ecosystem, birds and other wildlife inhabitants. Greenblatt said, “The Center now reaches thousands of schoolchildren annually with both on-site and outreach programs. We also offer summer camps, public programs, and a wildlife sanctuary that serves as a partner in many statewide conservation efforts and which is treasured by birders and other visitors year-round.”

Designated an Audubon Important Birding Area in 2002, the Coastal Center at Milford Point received the Best Recreational Award for 2020 from the Milford Chamber of Commerce and Milford Living Magazine, and was listed as Number 5 in the Top 15 Things to Do in Milford by the Crazy Tourist website.

The Connecticut Audubon Society conserves Connecticut’s environment through science-based education and advocacy focused on the state’s bird populations and habitats.