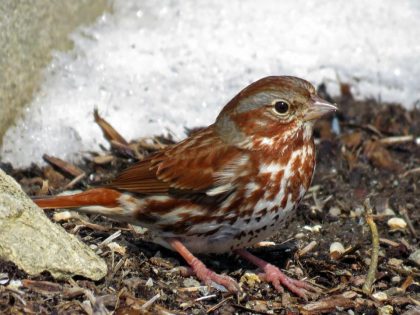 
The eBird website is down for a couple of days for maintenance so we can’t give you much information about where Fox Sparrows have been seen lately.

But there are a few reports on the Connecticut Ornithological Association’s list: Branford and Salisbury, to name two widely-spaced locations.

The video above was taken by Gilles Carter.

Revised and edited from a version published in 2017
by Ben Skaught
Sightings of the Fox Sparrow are on the increase in Connecticut. The place to look is on the ground. Typically Fox Sparrows can be found scratching for food among the leaf litter or picking up seeds under your feeder.

The Fox Sparrows is a large sparrow — roughly 6 1/2 to 7 inches. Those we see in Connecticut are generally rust-brown above with a mix of rust and gray on the head, and heavy brownish splotches on the flanks and the center of the chest.

Fox Sparrows can be seen spending much of their time hopping on the ground scratching through leaf litter foraging for insects and seeds. This is often referred to as a “double-scratch” involving a hop forward and an immediate hop back during which they scratch both feet backwards through the leaf litter.

Fox Sparrows rarely make long flights during their day-to-day activities. Within one day of arriving on the breeding grounds they establish territories of up to 2 1/2 acres in size, and they pair off with mates within a week. Outside of the breeding season, they usually spend their time alone or in small groups, and often associate with other sparrow species.