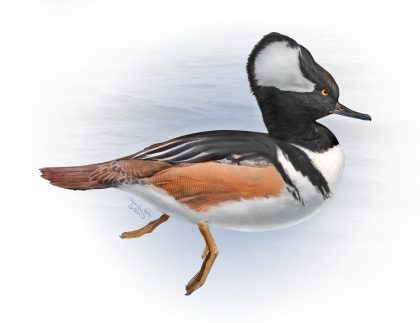 On a recent Sunday morning I was walking along a road near home, next to a beaver pond, and heard a sound I’d never heard before. I wrote in my notebook that it was like someone snoring, but in reverse. I saw two white spots on the water, maybe 30 yards away and raised my binoculars: two male Hooded Mergansers. I watched them throw their white-hooded heads way back and then hammer them forward three or four times, over and over. Courtship behavior. A female paddled behind them. Hooded Mergansers nested on that pond this year and last. If there were a competition for the most beautiful wild duck in Connecticut, Hooded Merganser would be right in there. — Tom Andersen

Today’s Daily Bird is edited from a version published in 2015. The videos are by Gilles Carter (the video below shows a female Hooded Merganser diving) and the illustration is by Patrick J. Lynch. Both are members of Connecticut Audubon’s Board of Directors.

by Milan Bull, Senior Director of Science and Conservation
Hooded Mergansers are beautiful, small diving ducks that frequent open brackish creeks and marshes in the fall and winter and into spring. The most reliable sites for viewing numbers of “Hoodies” include Lordship Boulevard, in Stratford, especially near the Sikorsky Airport, where the tidal creek flows into the Stewart B. McKinney National Wildlife Refuge. Hooded Mergansers can also often be found on the Connecticut River in Essex, the mouth of the Mill River on Harbor Road in Fairfield, along the Hammonassett River in Madison, and at the Milford Point Coastal Center.

Look for small diving ducks in the outflow/inflow of the creek. Sometimes they are resting on the water or actively diving for small fish, which they catch with their narrow, serrated bill. These areas attract many other waterfowl species, so don’t be surprised to find American Black Duck, Mallard, Wood Duck, and sometimes Pied-billed Grebe sharing the water with the Hoodies.

What it looks like: This is an unmistakable small duck. The male is black above with a white breast, rusty flanks and a unique white crest. The female is greyish brown with a tawny crest.

Conservation status: The IUCN currently lists these ducks as Least Concern> In fact the number of Hooded Mergansers isincreasing in Connecticut. They nest in tree cavities and boxes placed for Wood Ducks throughout much of the state.