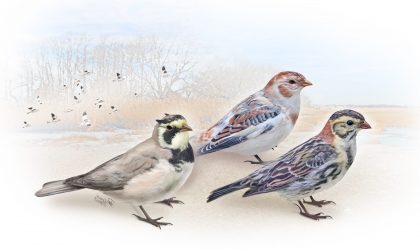 Lapland Longspur
Calcarius lapponicus
Each winter, uncommon avian visitors from the north appear in open habitats such as fallow farm fields, coastal beaches, grasslands, and dunes. Among these winter visitors may be the Lapland Longspur, a small songbird in the family Emberizidae – a taxonomic category composed of certain finches, American sparrows, towhees, buntings, and New World sparrows.

Lapland Longspurs breed in wet meadows and grassy hummocks of the Arctic tundra. Their winter range extends much wider – in North America it covers most of the lower 48 states.

They typically begin to appear in Connecticut by mid to late October, stay through much of the winter, then depart by the end of March.

To find it, visit coastal locations with open expanses of grassland, dunes, sand barrens or other open ruderal habitats. The Milford Point Coastal Center (1 Milford Point Road, Milford) is a good place to look for this uncommon winter visitor. Other productive spots in the past have been the grassy field near the Nature Center at Hammonasset Beach State Park in Madison and the gravelly parking lot or grassy fields at Sherwood Island State Park in Westport. There are dozens of possible locations across the state, including fallow farm fields.

Searching large flocks of Horned Larks or Snow Buntings out in the open grassy, weedy, or intermittently barren habitats is likely to turn up one or more Lapland Longspurs.

The Lapland Longspur has a similar size, shape and actions as a number of other sparrows that forage within open habitats, making it somewhat of an identification challenge for beginner birders in our area. This is because these birds are typically not sporting their breeding plumage when visiting during winter months. Instead they are more drably colored in the streaky earth-tone rust and browns of their sparrow cousins. 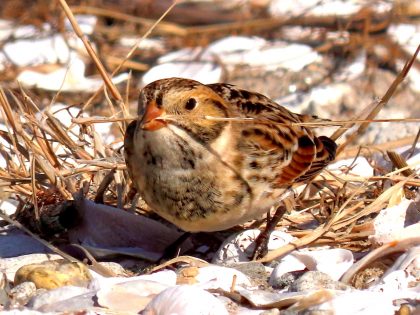 Look for dark bordered auriculars (the feathers behind the eyes covering the ears), dark streaking on the flanks, and usually some amount of rufous on the nape or tertials.

Occasionally one may be found lingering into late winter or may stop by while passing through during its northbound spring migration, rewarding birders with a view of its more striking breeding plumage.

Because they do not breed in the state and are often overlooked in the field, Lapland Longspurs are eagerly sought by birders each winter. When spring approaches, look for it in its full breeding plumage before it departs for its breeding grounds in more northern latitudes. — Written by former Connecticut Audubon staff member Anthony Zemba.