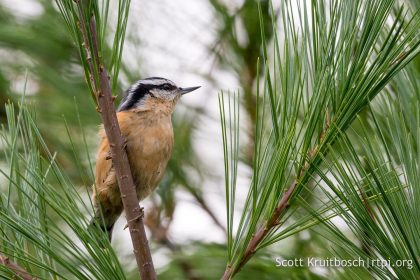 This Red-breasted Nuthatch was photographed by Scott Kruitbosch of the Roger Tory Peterson Institute.

November 3, 2020 — The most common and widespread of the winter finches in Connecticut during this fall’s irruption might be the Red-breasted Nuthatch, which of course isn’t a finch at all. The other winter finches are in the Fringillidae family; nuthatches are in the Sittidae family. They started showing up in Connecticut in early September and are still flitting around feeders and hanging upside down in conifers. A number of people have told us that this is the first time Red-breasted Nuthatches have visited their feeders. They’re a delight to see and hear.

This Daily Bird is edited and updated from a version published on November 15, 2018. Note that the first three paragraphs are as relevant now as they were then. — Tom Andersen


by Stefan Martin
By now, most of us have noticed a particular trend this season with the arrivals of certain “irruptive” winter species.

Purple Finch and Pine Siskin flocks have been abundant throughout the state so far and, as predicted, Evening Grosbeaks have even started to make an appearance. Who knows, maybe we’ll even get some redpolls or chasable crossbills!

While all of these birds are exciting in their own way, I can’t help but find myself excited for another species associated with these “irruption” years—the Red-breasted Nuthatch.

Where and when to find them: During “irruption” years, you can find this bird without much effort at all and, in some locations, you can see numerous individuals consistently for several weeks during fall migration. Virtually every habitat type throughout the state will have Red-breasted Nuthatches passing through including suburban neighborhoods and parks; they will regularly visit backyard sunflower and suet feeders. Some backyard feeders may even keep this species around all winter long. During non-irruption winters, you can look for Red-breasted Nuthatches in evergreen stands and, again, backyard feeders. 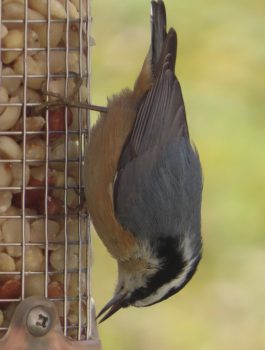 Unlike the other species mentioned above (excluding Purple Finch), Red-breasted Nuthatches breed in Connecticut. Unfortunately, statewide nesting populations and occurrence seem to be declining as a whole because of habitat loss from humans and pests alike. Thankfully for us, this species continues to use some of the remaining suitable habitat. During nesting season, you can see or hear Red-breasted Nuthatches among conifer stands and typically, near water. Spruce, pine, and hemlock groves are all favorite habitat types but aspen trees remain a favorite for cavity excavation. One of the most reliable places to see this species during the summer months is at White Memorial in Litchfield County.

What it sounds like: Very similar to White-breasted Nuthatch but much more “nasally.” Basically, think plugging your nose and doing a high to medium-pitched “yank, yank, yank” or “eh, eh, eh.”

What it looks like: A stout, energetic, blue-gray songbird with stubby legs and red flanks that fade into a pale-red breast. A contrasting black and white facial pattern with a dramatic black stripe extending through the eye into a long-thin bill. Males average brighter than females.

Look for their typical nuthatch behavior as they whorl up and down tree trunks and branches feeding under bark or in pine cones.

Conservation status: Although Connecticut populations seem to be declining, overall populations are healthy and is listed by the IUCN as a species of Least Concern.

Stefan Martin is a staff naturalist for the Connecticut Audubon Society.