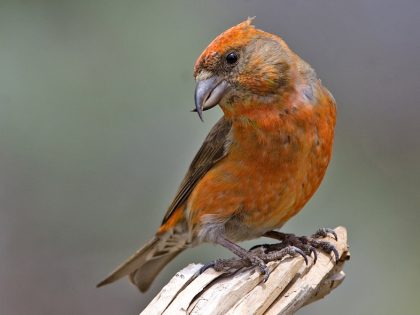 The Daily Bird’s last winter finch — at least for now — is the Red Crossbill. There have been far fewer reports of this species in Connecticut than of the other winter finches — one from Sunday in northern Connecticut and another from Monday in the southeastern corner of the state. But there have been numerous reports from Massachusetts, so they’re worth watching for. This account is revised and edited from a version published three years ago. — Tom Andersen

by Paul Cianfaglione
The Red Crossbill is a common resident of higher-altitude coniferous forests of northern New England, but is nomadic, irruptive, and unpredictable in Connecticut. They can wander extensively, especially during years when cone crops fail within its normal winter range. During irruption years, movements may begin as early as late September, and may coincide with exodus of Red-breasted Nuthatch.