Snow Bunting feeding on the sandbar at Milford Point, by Gilles Carter. 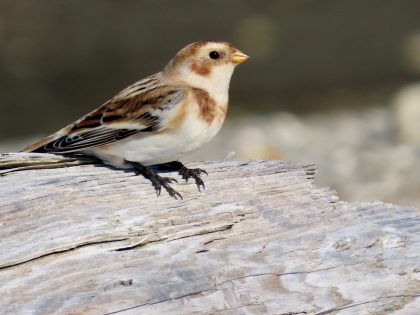 Edited from a version published in 2013. Note that the Daily Bird will be off during Thanksgiving week. Look for it again in early December.

Flocks of up to 50 Snow Buntings were feeding and flying about on the sandbar at the Milford Point Coastal Center this week  — an excellent sign for fans of this beautiful bird. You could do worse over this weekend or during Thanksgiving week than donning your mask and heading out to look for them, either there or elsewhere.

Snow Buntings are commonly found in large flocks during fall migration at open coastal fields and parking lots, and in agricultural fields inland. Besides the Coastal Center, Long Beach in Stratford is reliable location. A favorite spot is about halfway down the beach, where they sometimes feed in large open areas with sparse vegetation.

For folks with limited mobility, try Hammonasett Beach State Park in Madison. They are often found there in the grassy parking lot near the Nature Center. Other coastal parks are worth checking too, such as Silver Sands State Park in Milford, or Sherwood Island State Park in Westport.

Inland, there was a good-sized flock at Horsebarn Hill, at UConn in Storrs, earlier this month, and Snow Buntings can be found occasionally at our 700-acre Grassland Conservation Center at Pomfret. The best thing to do is to check eBird. 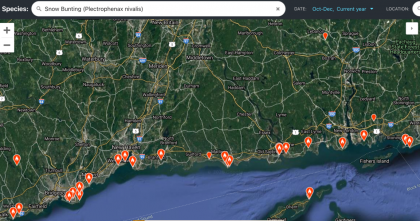 This eBird map shows how widespread Snow Buntings have been along the coast this month.

When you’re out there, scrutinize large flocks flying in the preferred habitat. Look for large amounts of white in the primaries and secondaries. Also look for the white rump patch and the white in the outer rectrices (tail feathers). On beaches and in coastal grass locations you can see them feeding on the ground and they will stick out because of the amount of white in males and females. Aptly they are sometimes nicknamed snowflakes because of this.

Snow Buntings are about the size of sparrows. Breeding males are primarily white and black; they have white upper bodies, white stomachs, and black backs. In the winter, males lose most of their overall white look, which becomes washed with brown. The face gets ginger patches on the cheek and a ginger cap. Non-breeding males and females look similar, but the males have more white on the underside while females have a more ginger look to them. The bill is short and yellow with a black tip.

Unlike most passerines they have feathers on their tarsus (lower leg). It is an adaptation to deal with the cold climates that they breed and winter in.

If you can’t locate Snow Buntings there are several other species that share a similar habitat niche, including Horned Lark (Eremophila alpestris), Lapland Longspur (Calcarius lapponicus ) and American Pipit (Anthus rubescens). All three can be found foraging in this habitat, often in mixed flocks.

Conservation status: Snow Buntings are considered to be of least concern by the IUCN.