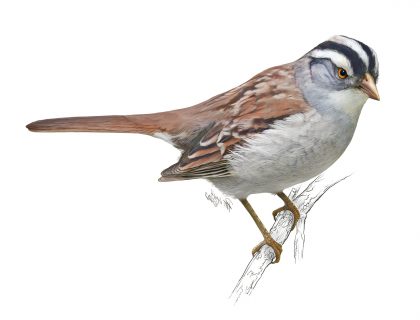 Illustration by Patrick J. Lynch. The video was taken by Gilles Carter. Both Pat and Gilles are members of Connecticut Audubon’s Board of Directors.

Edited from a version published in 2017

by Milan Bull, Senior Director of Science and Conservation
One of the aristocrats of the sparrow family, the size and handsome markings of this sparrow immediately distinguish it from other sparrows and draws the observer’s attention.

Although its fall plumage is incomparable to its fancy spring dress, enough of its sharp black-and-white head, pale yellowish beak and plain grey breast distinguish it from the White-throated Sparrows with which it commonly associates.

Watch for this bird along field edges and brushy meadows, or even on the ground at your feeder. It is always wise to check through any group of White-throats for this big sparrow.

What it looks like: One of our largest sparrows, the White-crowned Sparrow is rather bulky with a small bill and a long tail. Sometimes the head may have a peaked appearance. Your first impression may be of a plain grey sparrow, but soon you will notice bold, black-and-white stripes on the head. Immature birds have brown, not black markings on the head.

The White-crowned Sparrow is normally a winter or late fall bird in Connecticut although they sometimes arrive in September and sometimes persist until April. You will find them often associated with other sparrows in fields, along grassy roadsides and the margins of open areas. This bird also readily visits feeders for sunflower and other seeds, but normally stays on the ground, foraging for seeds dropped by other birds.

Good places to look are anywhere sparrows congregate in the fall and winter. Try Harkness Memorial State Park in Waterford and Silver Sands State Park in Milford. The video above was taken at the “Magic Fountain” water feature at the Milford Point Coastal Center, and you should also for White-crowned Sparrows at the Smith Richardson Preserve in Westport.

The song of the White-crowned Sparrow is one of the most studied bird songs in nature. There are five subspecies across the country and each sings a different dialect, but all are characterized by a sweet clear whistle followed by a series of jumbled buzzing whistles and a short trill or buzz at the end.