Today is Giving Tuesday. Your donation will be matched 2 to 1, and will go directly to help Connecticut’s birds. Thank you!

Make a gift for Connecticut’s birds! 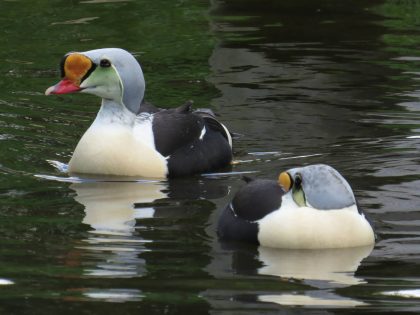 
Edited from a version published in November 2018

by Andy Griswold, Director of EcoTravel
December 1, 2020 — King Eider is a robust sea duck, somewhere between the size of crow and a goose, but smaller than its relative, the Common Eider. The breeding plumage male’s distinctive head pattern features a light frosted blue crown and nape, white face with pale lime green wash, and large sunset orange knob above its red bill. Black lines define these facial features and a black and white theme continue onto the body of this stocky duck.

Females are brown with black barring and are best distinguished from Common Eider females by their silhouette; King being a more delicate bird with a smaller bill proportion. Sub-adult birds vary in plumage as do adults in basic vs. alternate plumages.

Food sources include mollusks, crustaceans, marine vegetation, and algae, some individuals diving to as deep as 85 feet to forage.

King Eider nest well to our north, above the Arctic Circle, and only are found in Connecticut waters in the winter months, likely brought here by an off-shore weather disturbance. Records occur in our state about every three to five years and are often females or sub-adult males.

In 2018, a King Eider spent much of late December in New London Harbor. Three female King Eiders spent several weeks in the surf and on the jetty at Long Beach, Stratford, in 2017. All coastal areas, especially rocky areas, are places to look for this species.

King Eider is not currently listed as a species of concern regarding its conservation status, but little research has been done to quantify this in recent years. It is thought by some experts who review northern waterfowl surveys that there may have been some population decline in recent years, especially among the western wintering population. This drop may represent a population decline or a change in distribution due to human disturbance or changing weather patterns. The world population is estimated to be between 790,000 and 930,000 individuals. Wild birds will live to between 15 and 20 years. 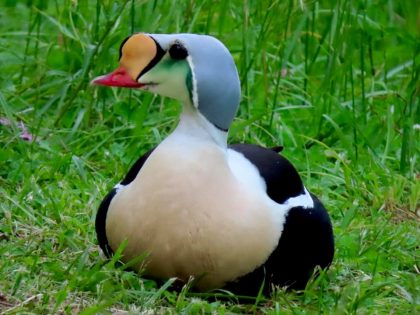 The amazing profile of a male King Eider. Photo by Patrick Comins.

King Eider in Connecticut never seem to be too far from Common Eider, so it may take a bit of practice to pick them out from the crowd, especially the females. This time of year is our duck season, so look for all of the scoters, Common Goldeneye, Red-breasted Merganser, and even a few other rarities like Barrows Goldeneye, Tufted Duck, and Eurasian Wigeon.