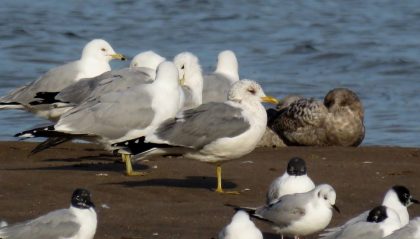 December 9, 2020 — Notice of a Mew Gull in New London went out this morning on our Rare Bird Alert. We are lucky enough to have posted about Mew Gull twice before, and even luckier that the authors were Patrick Comins, who is Connecticut Audubon’s executive director, and Greg Hanisek, editor of the Connecticut Ornithological Association’s quarterly journal, The Connecticut Warbler.

Patrick’s account, below, is from March 2018, when a Mew Gull was found on the Oyster River, on the Milford-West Haven border.

Greg’s account is from January 2019, when a Mew Gull spent a few days at Cove Island Park, Stamford. Both of those were a different subspecies from the bird in New London now (which is a Common Mew Gull), but the differences are not that great. — Tom Andersen

By Patrick Comins, Executive Director, Connecticut Audubon Society
Mew Gulls are a rare visitor to Connecticut, but winter and early spring (March into April) are a great time of year to look over gatherings of gulls along the coast or even inland to try to find a needle in the haystack.

There are three varieties of Mew Gull that we can find in Connecticut. The one featured in the photo and video comes from the greatest distance. It is known as the “Kamchatka” Gull and breeds in eastern Siberia and the northeast coast of Asia. It is the largest and darkest-backed variety of Mew Gull and probably the one that is the best find for our area. I managed to photograph and video it after Keith Mueller found it at the mouth of the Oyster River, on the Milford-West Haven border.

The third variety and probably the least rare is the “Common Gull,” from Europe.

It is possible that one day the North American subspecies may be split off from the Old World forms, but for now all three, plus a little known form from north central Asia, the Russian Common Gull, are grouped as one species, Larus canus, known as Common Gull in the U.K. and Mew Gull in the U.S.

How to identify it: Picking out a Mew Gull in a flock of gulls can be tricky, but adults tend to be darker backed than Herring or Ring-billed Gulls and on average slightly smaller than Ring-billed Gull, though the Kamchatka variety can be as large as a Ring-bill and has markedly darker wings, nearly as slate gray as a Lesser Black-Backed Gull or Laughing Gull.

One field mark that seems to hold true for all varieties and can be used to find a candidate in a flock is a broad and prominent “tertial crescent,” or a white crescent-shaped mark between the black primaries and the gray of the “back” when the bird is at rest.

The bill lacks the prominent markings of an adult Herring or Ring-billed Gull, although there can be the hint of a “ring” near the tip, though not nearly as prominent as found in a Ring-billed Gull. The bill is also generally quite small and short compared to Ring-billed Gulls, with the exception of the Kamchatka form which can have a similarly sized bill.

They are generally also quite “dove-headed” compared to our more familiar gull species. Occasional small Ring-billed Gulls can have a rounded head and short pointy bill, but adults will have the bright golden eyes and should be the same color of gray as the rest of the flock. An important confirmatory factor for Mew Gull is the presence of dark eyes. Most of the gulls in our region have bright golden eyes as adults. Any time you find a gull with dark eyes that is an adult (includes white spots on the primary tips) it is time to start taking photos and/or detailed notes.

And if you think all that’s difficult, immature Mew Gulls are much trickier to identify (and that identification issue goes well beyond the scope of this article).

Places to look for Mew Gull include Hammonasset Beach State Park in Madison, New Haven Harbor, and Long Beach in Stratford. Any location where gulls are gathering and feeding is a possibility.

Photo and video by Patrick Comins