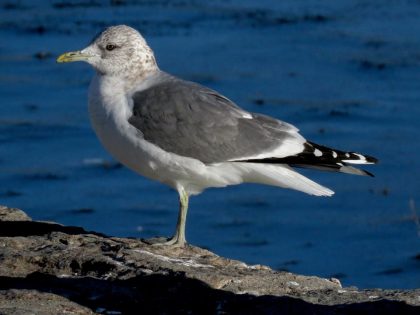 December 9, 2020 — Notice of a Mew Gull in New London just went out this morning on our Rare Bird Alert. We have two Mew Gull posts ready for today’s Daily Bird. One is by Patrick Comins, who is Connecticut Audubon’s executive director; the other is by Greg Hanisek, editor of the Connecticut Ornithological Association’s quarterly journal, The Connecticut Warbler.

Greg’s account, below, is from January 2019, when a Mew Gull spent a few days at Cove Island Park, Stamford. Both of those were a different subspecies from the bird in New London now (which is a “Common” Mew Gull), but their accounts work for both.

by Greg Hanisek
When thinking about the far corners of the world, the Kamchatka Peninsula works as well as anywhere for me. This far northeastern corner of Siberian Russia is a place westerners seldom visit (or even know of its existence), but right now a bird with the barely pronounceable subspecies name kamtschatschensis is in residence at Cove Island Park in Stamford.

The species involved is the Mew Gull, Larus canus, a bird of wide-spread global distribution, but with no breeding known in most of North America. Despite no foothold in New England, three of the four subspecies have been recorded in Connecticut, with most of the records coming within the past decade.

The subspecies of Mew Gull breeding in Europe is known as “Common” Gull, Larus c. canus. That name originates in Great Britain, where it is in fact a common bird. Most of the Mew Gull records from eastern North America are of this subspecies, including six for Connecticut. The bird in New London in December 2020 is the “Common” variety.

Mew Gulls do breed in North America, but only in a limited range in the Pacific Northwest. They represent a separate subspecies sometimes call “Short-billed” Gull, Larus c.brachyrhynchus. It’s very rare in the East, with just one confirmed Connecticut record.

Then we come to the third subspecies, a bird from far northeastern Asia known as “Kamchatka” Gull, the Siberian race of Mew Gull.

Gulls as a group are known for some monumental wandering. Connecticut has multiple records of another species from northeast Asia, the Slaty-backed Gull. A gull from the U.S. West Coast, Glaucous-winged Gull, has been recorded in Europe.

[This 20-second video, taken January 16, 2019, shows the gull striding left from the handicap spot and across the crosswalk in the Cove Island parking lot; notice the darker gray mantle.]

What Does It Look Like: Mew Gulls are similar to Ring-billed Gulls. The western European and northwestern North American subspecies are both smaller than Ring-billeds. These Mews have thin greenish yellow bills with either a thin ring or no ring at all, depending on season. Their mantles are slightly darker, and they have darker eyes than the Ring-billed’s.

The “Kamchatka” Gull is more distinctive and more easily separated from both Ring-billed Gulls and other subspecies of Mew Gull. Its mantle is darker than all the other Mews, and it’s big – slightly bigger and also bulkier than Ring-billed. Its dark mantle, almost suggesting a Lesser Black-backed Gull, makes it stand out among the pale-mantled adult Ring-billed and Herring Gulls. It’s greenish gray legs are much drabber than the yellow legs shown by the Ring-billeds. Its bill fits the general Mew pattern, although larger than the others.

Nick Bonomo, who has found several of Connecticut’s Mew Gulls, has written a detailed article on identification of the Mew Gull species complex.It appeared in The Connecticut Warbler, Volume 37 No. 2 April 2017.