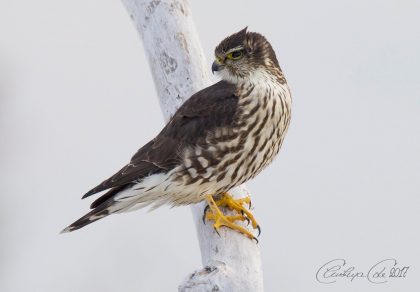 Sign up here to get The Daily Bird via text.

The Merlin is a small falcon about the same size as the American Kestrel, except a bit stockier. Merlins have pointed wings, a medium-length tail, and a streaked dark appearance. The males are slaty-gray to dark gray; the females and immature birds are browner in appearance. Their moustache is not very prominent, unlike in Peregrine Falcons.

The Merlin frequents open areas such as marshes, beaches, and large fields. They nest mainly in Canada and most migrate through Connecticut to winter further south, but some spend the winter in southern Connecticut, mainly along the coast.

They hunt by coming in low and fast into flocks of birds and chasing them higher in the sky to tire them out. They also, spend a lot of time perched at the top of a prominent tree scanning for prey.

Merlins are very unpredictable in where they will appear. You usually see one when you least expect it and it is often a quick look since they are usually flying fast in pursuit of prey.

In northeastern Connecticut, I’ve seen them at the Quinebaug Fish Hatchery in Plainfield and at Connecticut Audubon Society’s Center at Pomfret, behind the center building. Other potentially good places to find them include coastal locations such as our Milford Point Coastal Center as well as Hammonasset Beach State Park. 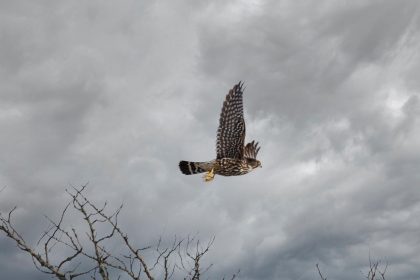 In recent weeks, birders have seen Merlin at Barn Island in Stonington; Seaside Park, Bridgeport; along the Norwalk River Esplanade near the I 95 overpass; at Lake Waramaug in Litchfield; and in a couple of locations in Hartford. One was seen in New Haven’s Wooster Square last week.

Conservation Status: The Merlin population appears to be stable or slightly increasing. They are now reported to be nesting in some cities, taking advantage of starlings and house sparrows. They breed in upstate New York, Vermont, New Hampshire and Maine. The banning of DDT also has contributed their increase.

Andy Rzeznikiewicz is Connecticut Audubon’s sanctuary manager in the northeastern and eastern part of the state.