Update from the Pelican Clinic: Eating a Mess of Minnows

That’s the Brown Pelican rescued from an icy Connecticut River cove on Wednesday. Christine Cummings, co-founder of the bird rehabilitation center A Place Called Hope in Killingworth, shot it after Connecticut Audubon member John Ogren caught a mess of minnows in a freshwater stream in Old Lyme and delivered them to Christine.

Christine said that generally she’d feed the pelican 15 or 20 fish at a time. But … “I asked my volunteer to put fish in the tub and she poured the whole bucket! Instead of removing them I decided to see what he would do.”

The answer is in the video. 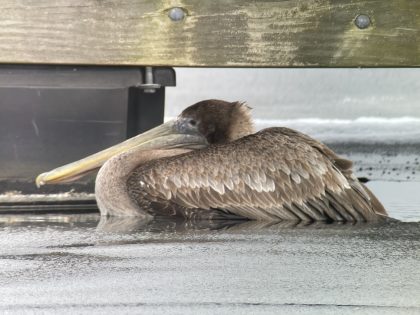 The Brown Pelican, awaiting rescue near a dock in Essex on Wednesday, January 27.

The saga of the Brown Pelican began Wednesday morning, when Andy Griswold, Connecticut Audubon’s EcoTravel director, saw it huddled against a floating dock in a cove in Essex. Andy recognized that it was injured and called Patrick Comins, Connecticut Audubon’s executive director, who contacted the state Department of Energy and Environmental Protection. Two conservation officers arrived and rescued the bird. (Connecticut Audubon is not licensed to rescue, treat or rehabilitate injured wildlife.)

A Place Called Hope has been caring for the pelican since Wednesday afternoon. Brown Pelicans are southern coastal birds that rarely venture near Connecticut; Virginia Beach, Virginia, is the approximate northern limit of its range. The rescued bird might have been carried north on a storm.

Christine is still observing it for signs of frostbite on its feet. But because the pelican has made a good recovery, it should be ready to be moved to a facility that can care for it on a longer-term basis within a few days. Christine said that the Busch Wildlife Center in Jupiter, Florida, has agreed to take it. She is working on finding a pilot to transport the bird.

You can read our account of the rescue here.