Update from the Pelican Clinic: Major Improvement from Yesterday 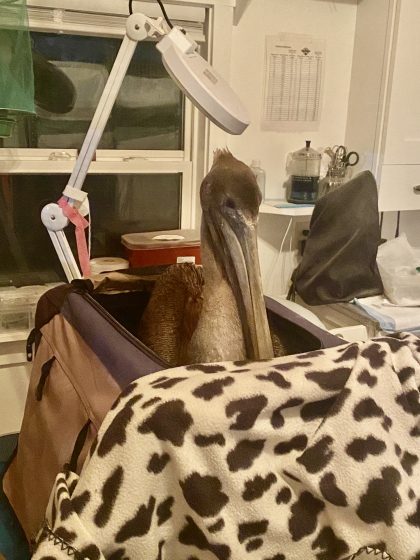 Last evening the Brown Pelican was still so stunned by its brush with death that it sat quietly by itself, shown here. By this morning, it was feisty enough that it needed to be in an enclosure. Photo courtesy of A Place Called Hope.

January 28, 2021 — The Brown Pelican that was rescued in dire condition from the icy Connecticut River in Essex yesterday is doing surprisingly well today and seems as if it will survive.

Christine Cummings, co-founder A Place Called Hope, the raptor rehabilitation center in Killingworth that has been treating the bird since yesterday afternoon, said the pelican has been taking fluids and eating a specially-prepared fish slurry.

“We’re bouncing this bird back,” she said on the phone this morning, with obvious happiness. “It was so close to dead on admission. But he is bouncing back and has returned to a feisty mannerism. I’m very surprised.”

The Brown Pelican saga started yesterday when Andy Griswold, director of Connecticut Audubon’s EcoTravel program, saw it in mid-morning huddled against a floating dock in a cove of the Connecticut River in Essex.

Andy recognized that the bird wasn’t well (normally a Brown Pelican would be actively looking for fish at that time of day) and called Connecticut Audubon Executive Director Patrick Comins.

Connecticut Audubon isn’t licensed to rescue or care for injured wildlife, so Patrick called the Connecticut Department of Energy and Environmental Protection. Two conservation officers went to the scene and rescued the pelican from the frigid cove. They brought it to A Place Called Hope, which was founded in 2007 and treated 829 birds last year (the 829 figure is corrected from an earlier version of this post) — none of them Brown Pelicans.

In fact, Christine said, she had never treated a Brown Pelican before and was reluctant at first to take this one. Brown Pelicans are southern coastal birds that generally aren’t found much further north than Virginia Beach, Va. The bird in Essex — a sub-adult that had been seen the day before at Saybrook Point — might have been carried here by a recent storm.

Christine said that volunteers have been working the phones to find a rehab center down south with more pelican experience. Once they find a place, they will also have to find a pilot to fly it down — a commercial flight is too cold at this time of year.

For now, the Brown Pelican is in A Place Called Hope’s hospital clinic with other convalescing birds. Christine said she is monitoring the bird for signs of frostbite, which often don’t show right away. And she put three small fish in its enclosure, to see if it would feed itself: “If he eats those fish, that’s a real good sign and will make this process go faster.”

The clinic, she said, “is a nice warm environment, and I have a sound machine in there with birds singing, and an ocean-wave sound. He thinks he’s at the beach.

“The Great Horned Owl is looking at me kind of funny though.”

Here’s the video of the rescue: