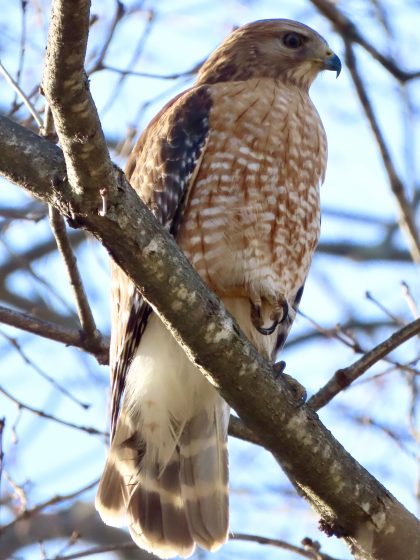 Revised from a version published in February 2018

by Greg Hanisek
Editor of The Connecticut Warbler, the journal of the Connecticut Ornithological Association
My fondness for Red-shouldered Hawks traces back to my early years of birding, when they were much more scarce than they are today. They also helped impress upon me the changing nature of bird populations.

The abundant buteo then in rural Northwest New Jersey where I grew up was the Red-tailed Hawk, but the older mentors I was fortunate to meet in my 20s recalled when the common woodlot hawk was the Red-shouldered. Seeing a Red-tailed before the 1950s was a wintertime treat.

Red-shouldered Hawks can be found in every month, but they can be especially conspicuous starting around this time of year, when mated pairs and rival males engage in raucous nuptial and territorial vocalizations. They get very noisy again when the young leave the nest, but some calling can be heard anytime.

You can listen to the call here.

Immatures are another matter. Their general pattern of browns with extensive underpart streaking is shared by Broad-winged Hawks (which are not here in winter) and Accipiters.

Fortunately, Red-shouldereds have one identifying feature present at all ages. They have conspicuous translucent “crescents” at the base of their primary flight feathers, visible on both the dorsal and ventral surfaces of the wings. Red-taileds sometimes show translucence from below, but the panels are rectangular, not crescent-like.

They have some other habits, though, that reveal their increased presence: they’re very vocal, they can be quite tame around human habitation and they don’t mind perching on utility wires. Their tameness extends to sometimes nesting close to houses and perching on bird feeders.

These hawks will opportunistically eat birds and any other small living things, but their low-key hunting methods are especially applied to cold-blooded prey in the warmer months. They’ve even been seen eating earthworms.

The migratory status of our local nesters is somewhat obscure, but birds from farther north migrate to and through Connecticut with peak numbers in late October and early November. Quaker Ridge in Greenwich and Lighthouse Point in New Haven are good places to see them in numbers on days with northwest winds.