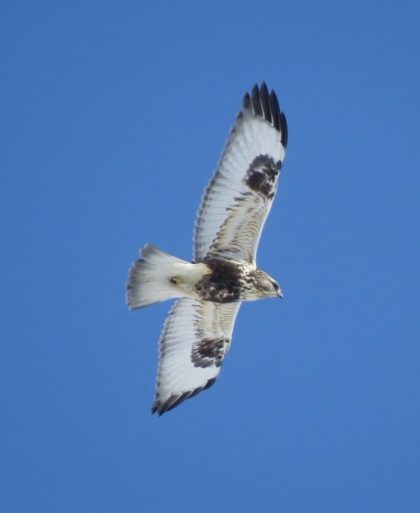 Rough-legged Hawk. Note the dark patches under the wing. Photo by Patrick Comins.

February 8, 2010 — When Rough-legged Hawks leave their tundra breeding grounds, they look for areas with the most abundant food source. In Connecticut this mean marshes and open fields. In recent days, Rough-winged Hawk has been seen in Tolland, Madison and Mansfield, with other scattered sightings reported over the last month.

Other traditional locations are Short Beach in Stratford and just down the road at the Stewart B. McKinney National Wildlife Refuge’s Stratford Great Meadows unit. Other known locations to see this species are at the mouth of the Connecticut River at Great Island. If you can’t make it down to coastal locations a great inland location is at Rocky Hill Meadows.

Once you are in a prime location – an open area with a lot of land on which the hawks can hunt – look to the largest trees or perches, which give an optimal view. If no birds are on hunting perches, look to the sky above the open area. Rough-legged Hawk is the only Buteo, and one of the only raptors, that will hover in the air while hunting – one of the easiest ways to readily identify this species.

If you see a larger raptor hovering over an open area you are most likely looking at a Rough-legged Hawk. The only other species that could be confused with Rough-legged Hawk would be Osprey, but with the Osprey’s overall white appearance the two are easily distinguishable and Ospreys do not spend the winter in our area.

Rough-legged Hawks are a bit on the variable side. Generally these birds have an overall brown appearance with a smattering of speckling, but there are two color morphs – light and dark. 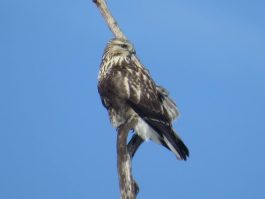 In dark morph individuals, the breast and breast band are completely dark, as are the under-wing patches and the head.

For both morphs, the upper part of the tail is white and the lower half is finely banded. A definitive field mark: this is the only Buteo to have feathers all the way down to its talons. This is an adaptive trait to deal with its cold breeding environment in the tundra. So if you see a raptor perched and can get a good look at the legs, take that into consideration.

If you go out to find a Rough-legged Hawk but have no luck, no worries – you are still in a location with a plethora of other great species to see.

Look for Snowy Owls. They’re not abundant this year but they come from the same breeding areas and winter in the same habitats as Rough-legged Hawks. Other wintering visitors that can also be seen at many of the same locations include Horned Lark (Eremophila alpestris), Lapland Longspur (Calcarius lapponicus), Snow Bunting (Plectrophenax nivalis) and American Pipit (Anthus rubescens). If you are near a coastal location this is also a great time of year to look at wintering ducks.

Updated from a 2014 account by Sean Graesser, who was then a conservation technician for the Connecticut Audubon Society.