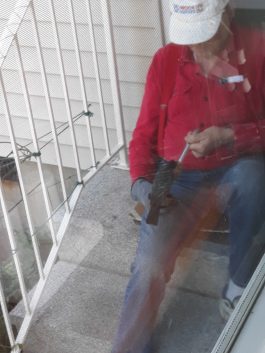 Charles Lautier feeding a bit of peanut butter to an American Robin at his back door.

February 4, 2021 — Charles Lautier, a resident of Stratford who has been a Connecticut Audubon member for several years, sent us this anecdote about a neighborhood American Robin. Food connects us to other humans; in Charles’s yard, one of the simplest foods — peanut butter — helped create a surprising and charming human-avian connection.

A couple of years ago I noticed that a robin was struggling mightily to get a bite of peanut butter I had placed on a suet feeder for Black-capped Chickadees, Tufted Titmice, and woodpeckers.

Because we had an issue with rats when I placed bird food on the ground for ground-feeding birds, I thought that I would try something that probably would have a very low chance of success because, unlike chickadees, American Robins are very wary if one attempts to get too close to them.

But, nothing ventured, nothing gained.

I decided to offer the hungry robin some peanut butter stuck to the end of a long stick. It immediately aroused his interest (it was a male) and he took two steps towards me as I sat on our back door steps.

Then he had a second thought about it and immediately took a step back. Then it was two steps forward again and followed by a step to the side. He was obviously struggling with his instinct to stay safe with his desire to eat.

Eventually, he stopped his avian “dance” and went for it!

After a period of about three weeks, it got to the point where he would fly to my outstretched finger and eat peanut butter from a tablespoon.

Once his little ones had fledged, he stopped coming, which was a good thing because I didn’t want him to become overly dependent on me for food.

I never saw him again until the following year when I came across a robin sitting on a trellis in our backyard. I called out to him and asked, “Robby. Is that you?”

As I approached him he didn’t fly away, like most robins would have done. I rushed into the house, applied some peanut butter to a tablespoon and went out and offered him the treat.

Without hesitation, he went right for it. — Charles Lautier