The pelican rescued in Connecticut is rehabbing in Florida 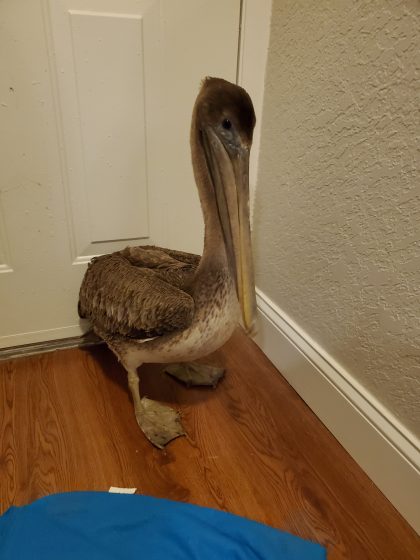 The Brown Pelican rescued in Essex is being cared for indoors for the time being and will eventually be moved to an outdoor aviary so it can test its wings. Photo courtesy of the Busch Wildlife Center.

February 5, 2021 — The injured Brown Pelican rescued last week from the Connecticut River has made it safely to a wildlife rehabilitation center in Florida, where it is being treated for pneumonia and a touch of frostbite but is otherwise doing well.

Two Connecticut pilots flew the bird yesterday from A Place Called Hope in Killingworth to the Busch Wildlife Sanctuary in Jupiter, Florida. The pilots — the mother-daughter team of Laurie and Ariana Strand — landed in the evening after a 12-hour flight.

Stephanie Franczak, director of the Busch Wildlife Hospital, is optimistic that the bird will be able to be released into the wild.

“His frostbite is minimal, but he has some wicked pneumonia from the cold,” she said. “We will be providing fluid therapy, nebulizing treatments [administering medicine via a sprayed mist], and supportive care while he is with us. We are optimistic about his recovery.”

The bird was rescued Wednesday, January 27, after Andy Griswold, Connecticut Audubon’s EcoTravel director, saw it huddled against a floating dock in a cove in Essex.

Andy recognized that it was injured and called Patrick Comins, Connecticut Audubon’s executive director, who contacted the state Department of Energy and Environmental Protection. Two conservation officers arrived and rescued the bird, taking it to A Place Called Hope (Connecticut Audubon is not licensed to rescue, treat or rehabilitate injured wildlife).

The goal at the Busch Wildlife Center is to treat the bird until it’s well enough to be released. It’s being cared for indoors now but will eventually be moved to an outdoor aviary in the center’s waterbird rehabilitation area so it can test its wings.

You can catch up on the backstory here.