A New Home for Milford Point’s Ospreys, Thanks to the Teamwork of Volunteers and the Generosity of Donors 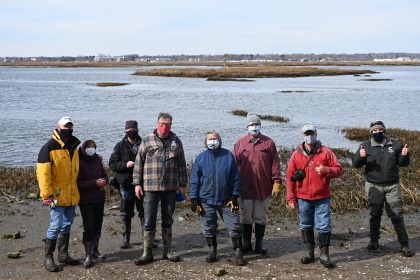 March 1, 2021 — Move-in day is not for another month but the Milford Point Ospreys’ new home is ready for their arrival.

Thanks to a team of volunteers, and an enormously generous outpouring of donations from Connecticut Audubon supporters, a new Osprey nest platform went up in the marsh at the Milford Point Coastal Center on Wednesday, February 24.

Ospreys have nested on a platform there for 20 years, delighting the thousands of viewers who watch them live-streamed from Connecticut Audubon’s Osprey Cam. But a storm toppled the platform in early February, and took the camera equipment with it. Connecticut Audubon supporters responded, and volunteers working with the efficiency of a NASCAR pit crew supplied the material and labor.

Still to come is a new camera and solar array so the Osprey Cam can begin live-streaming the birds when they arrive and start building a new nest in late March.

The platform-raising started at 10 a.m, when seven volunteers and one Connecticut Audubon staff member embarked in a canoe and two boats laden with lumber and tools. They ferried across 400 feet of tidal channel to the mucky island that has been the Ospreys’ home.

The shore of Long Island Sound can be bone-chillingly icy in February. But the group, led by Terry Shaw of Guilford, caught a break with the weather.

“It was a little rough going out,” he said, “and certainly windy, but it was sunny and because the temperature was almost 50, it was fine.” 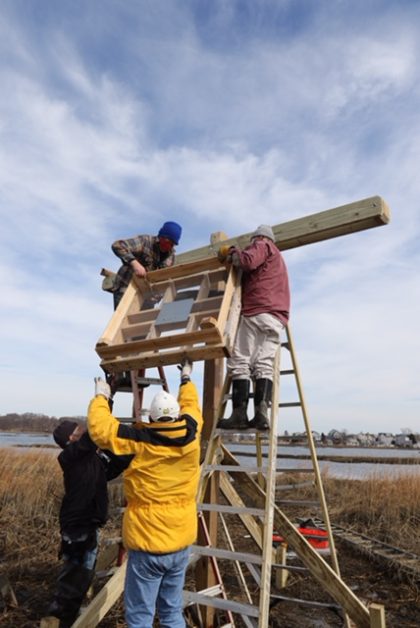 Connecticut Audubon’s Osprey Nation program has mapped over 500 Osprey nests in the state. Many are in dead trees or other natural features but many others are on platforms. They don’t last forever, though.

Since 2014 Terry Shaw has been working with a core group of about 20 volunteers that he can call on when a platform falls; over the years, 150 people have helped. The French Foundation generously supplies funding for the lumber and hardware..

In addition to Terry, the group at the Coastal Center consisted of Ed Haesche, Deanna Broderick, Sally and Bill Heffernan, and Matthew Hally. Frank Mantlik, a Coastal Center board member, was part of the work crew, as was Connecticut Audubon’s habitat steward Stefan Martin.

For Terry, it was the 103rd Osprey platform he has erected in seven years.

“They had it down to a science,” Stefan Martin said. “Everything cut perfectly, measured out — everything was just extraordinary. The term ‘a well-oiled machine’ is the perfect term. Before someone could ask for a drill, it was in their hand.”

Time was of the essence. There was plenty of water for the boats at the 9 a.m. high tide, but too much on the island, which was submerged. So they waited for the tide to drop and then embarked to reach the island around 10. By 11:45 the work was done, with just enough time to row back as the water ebbed.

One different feature of the new platform is a 12-foot crossbar underneath. The new Osprey Cam will perch on one end, providing a stable base and a wider view than in previous years.

The other end of the new perch is reserved for the Ospreys themselves. The hatchlings are expected in early June. The perch will be an ideal spot for the parents to keep an eye on their growing family. — Tom Andersen