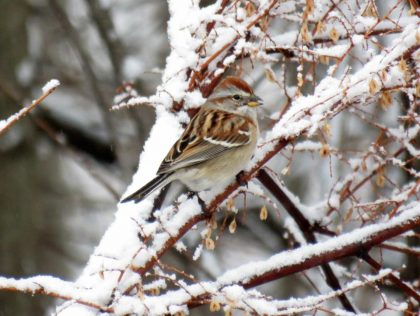 Edited and updated from a version published in 2019

by Helena Ives
To those unfamiliar with birds, American Tree Sparrow would likely blend in with the background or be glossed over as just another sparrow.

But to a birder’s eye, this species perfectly masters a balance between drab coloring and striking streaks of rufus, especially in an already bland winter backdrop.

And, as a species that is more abundant in the central United States, American Tree Sparrows are a welcome surprise in Connecticut on a winter birding walk filled with Northern Cardinals, Downy Woodpeckers, and Carolina Wrens.

An Arctic breeder, American Tree Sparrows in Connecticut are confined to the winter months. Their wintering ground is centralized in the northern to central portion of the United States, in Nebraska, Kansas, Iowa and other places with abundant open space and grassy fields.

In Connecticut, they’re less common. They prefer areas that are open and have low vegetation, like field and marshes, but also take advantage of backyard bird feeders.

Check eBird for recent locations. One birder saw five on Sand Bank Road in Watertown yesterday, and other birders found nine in the Wethersfield Meadows and 10 on Vibert Road, in South Windsor, on Monday, March 1. 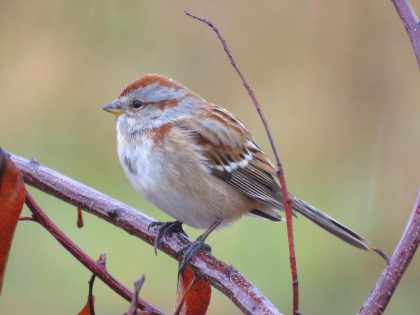 Note the American Tree Sparrow’s bi-colored bill, white wing bars, and rufous cap, in addition to the dark spot on its breast.

American Tree Sparrow’s rufous cap and eyeline contrast starkly with their grey-white breast (with its single dark spot) and belly, creating a more distinct pattern that is typically easy to pick out when they’re among a group of other sparrows. Their white wing bars, rufous wing patch, and bi-colored bill are unique among most other species that would be found in the same habitat.

Many sparrow species are thought to be abundant. And some, like the Song Sparrow, are. But American Tree Sparrows have had a different experience. The population is estimated to have declined by 53 percent over the past 40 years.

While the reason for the decline is uncertain, changes in the landscapes this species relies on has been attributed as a main contributing factor. The wintering grounds of American Tree Sparrows in Connecticut and the northern portion of the United States has seen a dramatic decrease in early successional habitat which are dominated by grasses, low growing shrubs, and saplings.

Especially in Connecticut, efforts to create more of this young forest and grassland habitat has are increasing, which holds promise for American Tree Sparrows and other species that rely on these areas.

Helena Ives is a former IBA Coastal Ranger at the Milford Point Coastal Center. She is a graduate of the University of Connecticut with a degree in wildlife conservation.