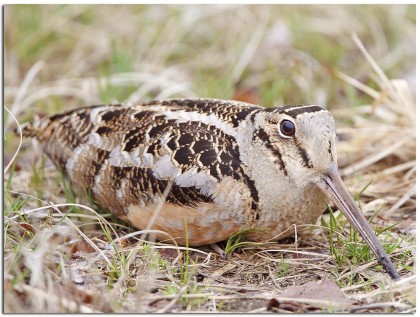 
In my neighborhood, near the New York-Connecticut border, American Woodcock were in evidence last evening and this evening. Sunset yesterday was 5:55; I heard the first bird “peent” at 6:04, followed within minutes by two other birds. The aerial displays started at 6:11, with just  enough light to see a woodcock silhouette rising and circling in the sky. American Woodcock is a springtime favorite, and worth pulling out again for the Daily Bird. — Tom Andersen


by Andy Rzeznikiewicz
A harbinger of spring, American Woodcocks arrived in Connecticut in February again this year rather than in March. Their flight displays and calls are an amazing spectacle that should be witnessed by all who appreciate nature and yearn for spring to start.

American Woodcock is a plump, softball-sized bird with a very long pointed bill. It has large black eyes and an intricate cryptic coloring. Colors include a mix of black, browns, gray and white. When sitting on a nest in the leaves it is practically invisible.

Most areas of the state have displaying woodcock if located with appropriate habitat nearby. Ideal locations are an open field or meadow near a young forest, preferably wet. Every dawn and dusk the males fly out of the forested areas and call from the open area, then fly over 200 feet in the air in a circle with a twittering sound made by their wingbeats. This is done to attract females. In good habitat many woodcock can be seen or heard in one location. The other way to find one is to get lucky and flush one in the woods on a walk.

They are one of the first signs of spring in Connecticut, usually arriving by the second week of March. But this year and last, they arrived in February!

They can eat their weight in earthworms, their main food, in one day. They also feed on other insects and sometimes seed. The tip of their bill is flexible so they can open it while probing the mud for worms. As with yesterday’s Daily Bird, Wilson’s Snipe, the placement of their eyes allow them to see danger from behind them while they are probing in the soft ground for food.

The woodcock nests only once a season, usually laying four eggs. They will re-nest if the first nest is destroyed. They start incubating eggs as early as March.

American Woodcock is considered a species of least concern, although they have shown a decline in New England and the Midwest, mostly due to habitat loss caused by development and the maturing of forests. American Woodcock is a game bird although its popularity among hunters has dropped since the 1960s and ‘70’s. The other suspected problem they face is poisoning from heavy metals that accumulate in the earthworms they eat.