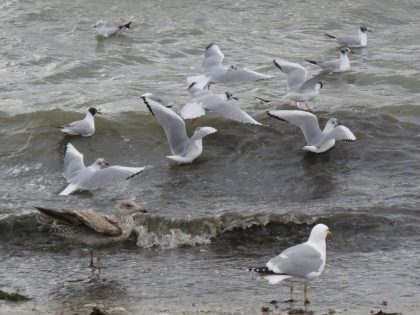 Bonaparte’s Gulls near shore, with two Herring Gulls in the foreground. Photo by Patrick Comins.

Revised from a v


by Nick Bonomo
Gulls are far less likely to spark a birder’s excitement than the ever-popular warblers or raptors, but Bonaparte’s Gulls are very different than their familiar beach-loafing, French fry-loving relatives.

Bonaparte’s Gulls, or “Bonies” as they are affectionately called, are small, spunky, sharply-plumaged gulls that may remind you more of terns than the typical “seagulls” you’re used to seeing.

They are most likely to be seen during spring migration through Long Island Sound, which peaks from now to early-April, when with some luck the larger flocks may be found. When in flight, these flocks stay very tightly together and can be quite acrobatic as they weave back and forth through the air.

This gull species, along with other gulls and even some ducks, can be seen feeding on barnacle larvae that are found floating on the water’s surface. This annual phenomenon known as a plankton “bloom” occurs in March and April, coinciding with the Bonaparte’s Gull migration. 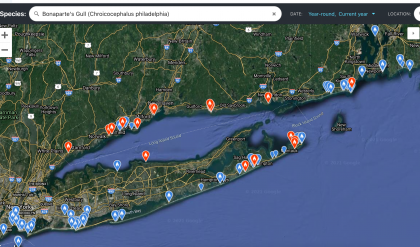 This eBird map shows where Bonaparte’s Gulls have been seen in 2021.

Look for a very small gull, close in size to a Common Tern. At this time of year, this species is molting from non-breeding plumage to breeding plumage, so individuals may have a complete black hood, no hood at all, or various patterns of patchy black and white on the head. (The protein-rich plankton they feed on helps the Bonaparte’s Gulls molt.)

During winter the black hood is replaced by a dark smudge behind the eye. In breeding plumage, these little guys have handsome black hoods and a pale gray back, white body, and black wingtips.

The short, thin bill is always black, while the legs vary from pink to orange in color.

In flight, an adult Bonaparte’s Gull has a striking pattern to its pointy wings: the gray upper-wing has a bright white triangle on its leading edge and jet black tips to the primaries (the outer flight feathers). Immature birds have some additional brown and black feathering in the wings.

Where to find it
This is strictly a coastal gull and may be seen anywhere along the Connecticut shoreline. They show a fondness for creek and river mouths, so locations like Southport Beach in Fairfield and the Oyster River mouth in Milford/West Haven are two of their favorite hangouts. 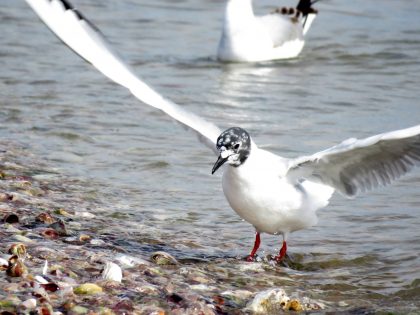 While they will readily mingle with other gull species while feeding on the water, they tend to roost on mudflats in homogeneous flocks that can hold as many as several hundred birds.

Conservation status
Bonaparte’s Gull, a widespread North American species, is listed as a species of “Least Concern,” so the large population appears to be stable at this time. Numbers seen in Connecticut have dramatically reduced over the past 15 years, but it is not known whether this reflects a change in overall population size or if it is something less alarming, such as changes in migration patterns or regional food availability.