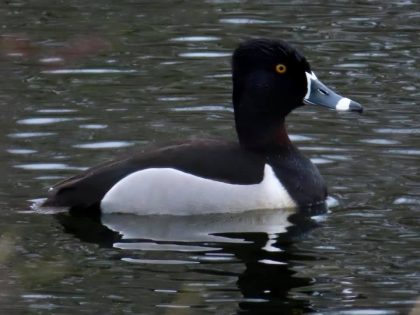 A drake Ring-necked Duck. Note the barely-discernible chestnut collar that gives this bird its common and scientific name.

by Tom Andersen
Communications Director
March 22, 2021 — Ring-necked Ducks appear on Connecticut’s shallow freshwater lakes as soon as the ice disappears in late winter and early spring. As with many waterfowl, if you pick the right spot and don’t try to get too close, they can be fairly easy to observe with binoculars or a scope.

Out on a late-afternoon errand the other day, I found 16 Ring-necked Ducks on Woods Pond in Norwalk, near 14-Acre Pond, which is much better-known among birders. Gadwall, Hooded Mergansers, Wood Ducks, and Mallards were there as well.

On a nearby reservoir there were 61 Ring-necked Ducks on March 17. Stand quietly and you can hear the males make a call that sounds to me like electronic beeping; the females grunt and bark in something closer to a typical duck-like quack.

Ring-necked Duck is in the genus Aythya, the diving ducks. Other members of the genus include Greater and Lesser Scaup, Canvasback, and Redhead. 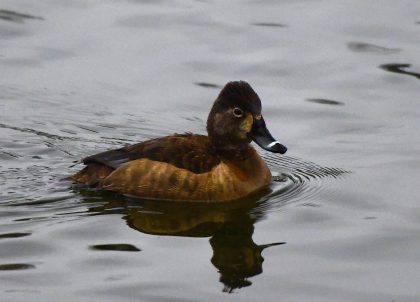 You can find those (and occasionally Tufted Duck) in Connecticut but Ring-necked Duck is the only one that reliably occurs inland. It favors shallow lakes where it can dive and feed on aquatic vegetation and invertebrates. I see them most regularly spread out along a shallow reservoir that straddles the Connecticut-New York border, five to six dozen at a time in spring.

They nest in northernmost sections of New England and New York, and in Canada.

Ring-necked ducks are about 15 to 18 inches long. From a distance the males give a general impression of being black with gray sides; the females brown. On a pond with several species of waterfowl, look for the duck that’s smaller than familiar dabblers like American Black Duck and Mallard and bigger than divers like Bufflehead and Hooded Merganser.

The Cornell Lab of Ornithology’s All About Birds website describes them succinctly:

“Males are bold black-and-gray ducks with a dark head, black back, and gray sides with a white hash mark on the chest. Females are rich brown with a contrastingly pale cheek, a white patch near the bill, and a whitish eyering. Adult males have a prominent white ring on the bill.”

I’ve never seen the neck ring that gives the bird its name (common name and scientific name, collaris) but if you look carefully you can see it in Patrick Comins’s photo, above — a rich dark chestnut around the lower neck. 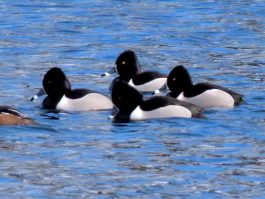 As for its conservation status, Ring-necked Duck is considered to be of least concern by the IUCN, and its population is increasing in North America since the 1970s.