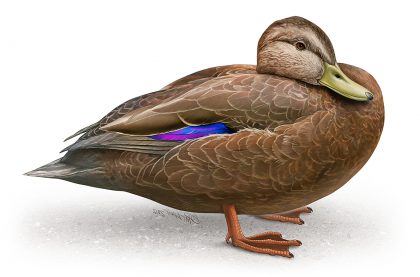 by Andy Rzeznikiewicz
March 24, 2021 — American Black Ducks are a large-bodied dabbling duck about the size of a mallard. They have a yellowish bill with a gray head and dark body.

When in flight they appear to be black in color, which helps distinguish them when mixed with Mallards. When flying, the undersides of the wings are bright white. The speculum or secondaries are iridescent purple without white borders. Often people are confused by hybrid Mallard x Black Duck crosses.

Where to find it: Black Ducks are found in Connecticut year-round. In winter and early spring, they congregate mainly in saltwater ponds and marshes, or in small rivers with pockets of open water. During migration they can be found in flooded agricultural fields and smaller wetland areas.

Breeding season is starting so look for them mainly in freshwater wetlands such as shallow ponds, marshes, and beaver ponds. Some nesting occurs in saltwater marshes as well.

Conservation Status: Although they are relatively common still, Black Ducks have declined in number dramatically since the mid 1900’s, largely because of habitat loss and hybridization.

Black Ducks are more sensitive to human disturbance than Mallards. Large areas of potential nesting habitat have been encroached on by human activity and the birds shy away from using them. 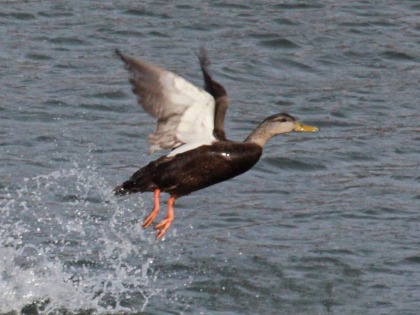 According to Min Huang, Ph.D, the migratory game program leader for the Connecticut Department of Energy and Environmental Protection, Black Duck banding efforts in the early 2010s showed that 45 percent of the Black Ducks caught in Connecticut were hybrids. Throughout all of New York and New England, the number was 19 percent; in the mid-Atlantic states eight percent; in Virginia four percent; and in the Canadian Maritimes, 14 percent.

Andy Rzeznikiewicz is sanctuary manager for our preserves in Pomfret, Hampton, and elsewhere in eastern Connecticut. Patrick J. Lynch, a member of the Board of the Connecticut Audubon Society, is the author of A Field Guide to Long Island Sound and other field guides.