An injured Herring Gull at Milford Point: add face masks to fishing line, nets, and balloon strings on the list of litter that imperils birds 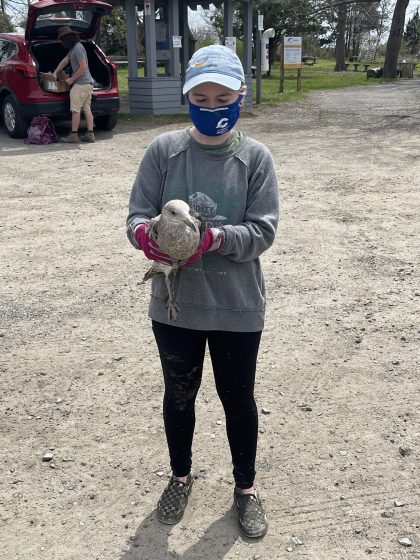 Katerina Gillis holds the Herring Gull that she and her colleague, John Mager, freed from entanglement in a face mask. Photo by Patrick Comins.

April 23, 2021 — They are the latest menace to wildlife — Covid protection masks that are lost or thrown on the ground and get tangled around birds’ wings, necks, and legs.

On Monday, April 19, two members of Connecticut Audubon’s staff at the Milford Point Coastal Center found a young Herring Gull completely caught in a mask. Coastal Rangers Katerina Gillis and John Mager were able to remove it by cutting it carefully with a knife. The bird is now being treated at a wildlife rehabilitation facility.

Fishing line, plastic nets, balloon string and other trash that doesn’t break down or fall apart have long been a scourge to wildlife.

Several years ago, for example, an Osprey in Fairfield got caught in fishing line and died as it tried to free itself. Last summer, Connecticut Audubon staff found and freed an American Oystercatcher caught in netting at Milford Point.

“This is definitely going to be a problem,” said wildlife rehabilitator Christine Cummings, of A Place Called Hope in Killington.

But it doesn’t have to be.

Connecticut Audubon Executive Director Patrick Comins, who was part of the team that rescued the oystercatcher last summer, implored people to dispose of trash responsibly.

“It’s heart-wrenching to see a bird or any other animal rendered helpless because someone was careless with a mask or fishing line,” he said. “Milford Point and our other preserves are sanctuaries and refuges — places where animals can thrive and are supposed to be safe, not places where carelessness puts them at risk.

“Please make sure that you carry out whatever you carry in.”

Damaged wing
Katerina Gillis said she was alerted to the Herring Gull by an acquaintance who had seen it while photographing birds on Milford Point’s sandbar. She and John Mager found it easily.

“I put my gloves on and grabbed the bird and carried it back onto the spit, where we looked at it to see the extent of its injuries,” Katerina said. “The string on this mask was long and it was elastic. So it was around pretty much the entire body from neck to left wing to its legs — it just was completely entangled in it.”

The bird’s wing appeared to be damaged. So instead of releasing it, they carried it to the Coastal Center parking lot, placed it safely in a ventilated box, and called A Place Called Hope. 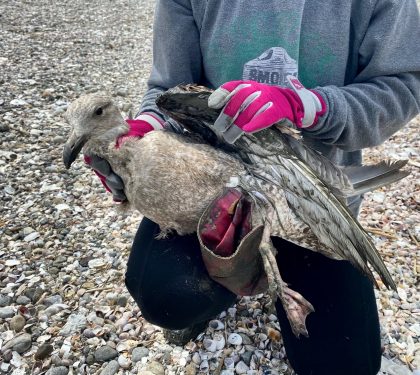 You can see the mask and its straps are wrapped around different parts of the gull.

“This young gull was badly entangled in the face mask,” said A Place Called Hope’s co-founder, Christine Cummings. “It really did a number on its wing. The muscles are strained and the wingtip badly abraded. I am treating it with cold laser and it is responding favorably!”

The gull hadn’t been able to eat and is “horribly thin” and can’t fly, she said, adding that it needs time to regain its weight and mobility.

Katerina works on the beach and sandbar of the Coastal Center almost every day and regularly sees discarded face masks.

“They started really popping up at the end of last year,” she said, “but now that we’re at spring number 2 of this pandemic, we’re starting to see a lot more disposables  — whether they’re washing up or blowing out of people’s pockets. Like fishing line or balloon string, they’re starting to become part of the normal trash.”

But trash is a relatively simple problem. Individuals who do the right thing can make a big difference. Please visit Connecticut Audubon’s sanctuaries and other natural areas, but do so responsibly. — Tom Andersen