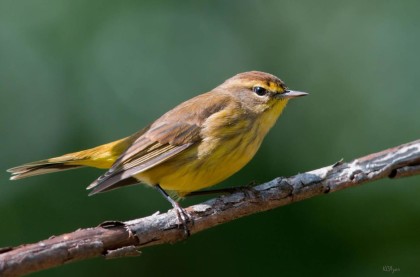 April 14, 2021 — If you wait until May to look for spring warblers in Connecticut, you might miss seeing this gem.

At this time of year Palm Warblers have entirely bright yellow underparts with fine dark steaks on their breast sides. They have a rusty red cap that is most colorful in males, an eyebrow that is just as yellow as the breast, and olive-brown upper parts without wing bars.

The rump (the area between the back and the base of the tail) is lime green. The tail is rather long for a warbler; it appears black-and-white from below and dark olive from above.

Behavior is just as useful as plumage when identifying this bird, as they are one of few warblers that constantly pump their tails up and down as they forage for insects.

During migration Palm Warblers may be seen in any patch of woodland, thicket, or field edge. While some warbler species tend to favor one particular level of the canopy or understory, Palm Warblers can be seen anywhere from the upper canopy to the ground itself.

Typically this species’ spring passage through Connecticut to its Canadian breeding ground peaks during the second half of April, and numbers quickly drop once the calendar turns to May.

Nearly all have passed through by Mothers Day, when most warbler species have yet to reach their peak.

Conservation status: Palm Warbler, a widespread North American species, is listed by the IUCN as a species of “Least Concern,” so the large population appears to be stable at this time.