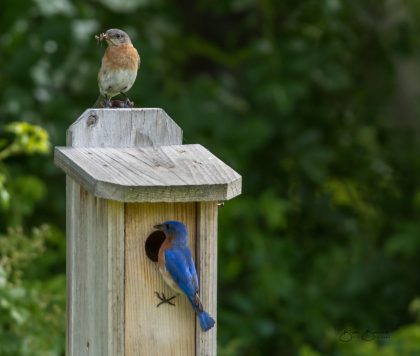 by Andy Rzeznikiewicz
April 21, 2021 — One of the most sought after birds to attract to one’s yard!

Males are a brilliant bright blue year round with a rusty colored breast, females are more grayish blue with a rusty breast and flanks. Their song is a thrush-like gurgle, often soft but sometimes surprisingly loud and forceful.

Bluebirds are usually found in small flocks throughout the year. But once spring rolls around they break off into pairs and start to choose a nesting site.  The vast majority use man-made nest boxes, but natural cavities are commonly used as well.

It is thanks to large scale nest box installations over the past decades thatEastern Bluebirds are increasing and are of low conservation concern.

Their preferred nesting habitat is semi-open to large open areas.  They drop from perches to pluck insects off the ground.

In fall and winter, Eastern Bluebirds frequent woodlands and swamps, feeding on berries. Putting out real beef suet and or meal worms can attract bluebirds to your yard all winter.

Connecticut Audubon’s Bafflin Sanctuary in Pomfret is a very reliable location to find them year round. They also nest at Deer Pond Farm in Sherman and the Smith Richard Preserve in Westport, among many other locations.

Eastern Bluebirds nest two to three times per year, with three to five eggs per nest. The make their nests with dry grasses or pine needles; the eggs are blue, sometimes a pale blue.  If you remove the old nest right after the baby birds leave the nest, you’ll increase your chances of them using the nest box again that season.

Always clean out your nest boxes in March.  If you clean it too soon in the fall or winter, mice most likely take over.

If you want to increase your chances of attracting a bluebird to nest on your property, install multiple boxes, place them on fence posts (wood or steel), and put them out in the most open area of your yard. Multiple boxes also help relieve competition from other birds.

Bluebirds are very territorial, so don’t expect more than one pair per yard, unless you have a large property.

The introduction of European House Sparrows are the main threat to Eastern Bluebirds.  They’re very aggressive at taking over nest boxes and sometimes killing bluebirds and their babies.