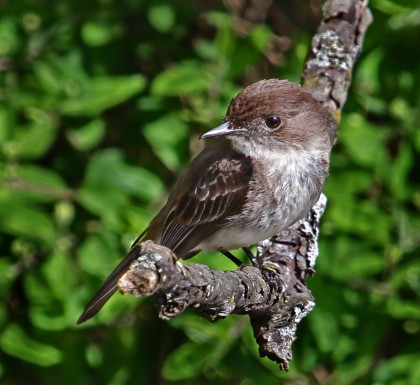 by Andy Rzeznikiewicz
April 6, 2021— Eastern Phoebe is one of the first songbirds to arrive back in Connecticut during spring migration.

They’re mainly insect eaters, particularly flying insects. They’re a common species that can be found around most homes and outbuildings, and readily build their nest on small ledges under overhangs in buildings, on outdoor lights and under bridges.

The vast majority of phoebes migrate out of the state, but a few will spend the winter here, usually  near waterbodies that don’t freeze, where they can find some insects to survive on.

Most Eastern Phoebes nest twice per season. The first nesting is usually parasitized by Brown-headed Cowbirds and thus fail. To identify if your nest has been parasitized by cowbirds is easy, Phoebe eggs are white and cowbird eggs are a bit larger and speckled.

Males and females look identical. To easily identify an Eastern Phoebe from other flycatcher species, note the tail wagging, lack of prominent wing bars, and slightly larger size. Plus, they’re the only flycatcher species in Connecticut in March and April.

Their population is considered stable and of least concern. The main threats to Eastern Phoebes are outdoor cats, Brown-headed Cowbird nest parasitism, and insecticide use.