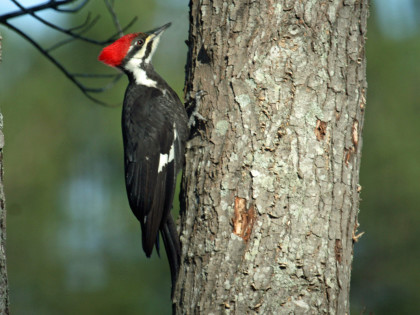 Woodpeckers are noisy this time of year. If you happen to live near a pair of Pileateds, you’ll know it. Add their loud territorial call to that of Red-bellied Woodpeckers, Hairy Woodpeckers, Common Flicker, and Downy Woodpecker, and you have a woodpecker cacophony.

by Mike Aurelia, former member of the Connecticut Audubon Board of Directors

Video by Board member Gilles Carter.


April 23, 2021 — The Pileated Woodpecker is the largest woodpecker found in Connecticut. Crow-sized, it is an inhabitant of the mixed deciduous and coniferous forests of North America. The birds especially like forests where large old trees can be found.

In Connecticut, the Pileated Woodpecker can be tracked down in almost all large forested areas year-round, if one is patient. The birds don’t seem to migrate if there is enough food to be found in their local territory. As forests returned to Connecticut in the late 1800’s and suburban development expanded beyond the city limits, this woodpecker started to be observed in backyards if large, old trees were nearby.

What it looks like: The Pileated Woodpecker is 16- to 19 1/2-inches long and, according to the Cornell Lab of Ornithology, is “largely a black bird with a white line from the bill through the cheek and down the neck and with a very distinctive red crest.” As a child I thought of it as my “Woody Woodpecker” bird. 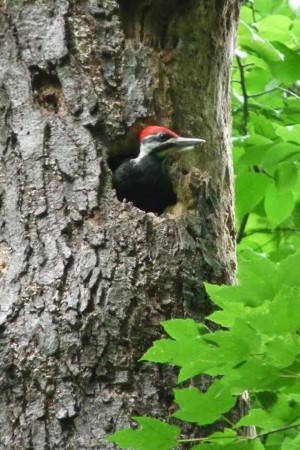 Where and How to Find It: This woodpecker is common throughout the state, though it sometimes can be difficult to find. Quite often you will hear its loud, irregular call of: Kik-kik -kikkik – kik-kik which sounds a little like a Northern Flicker but louder. Its drumming is also distinctive and can be heard from great distances. The drumming starts like a slow drumroll, loud and resonant, and speeds up toward the end.

Other interesting facts: The Pileated Woodpecker largely eats carpenter ants and wood-boring grubs as well as wild fruit and nuts. Its large chisel-like bill is responsible for making large piles of chips at the base of dead trees and large rectangular holes in the tree trunks. You will often see the pile of chips or holes before you notice the bird. This woodpecker is seen as often near or on the ground exploring downed trees as it is high up on a tree trunk.