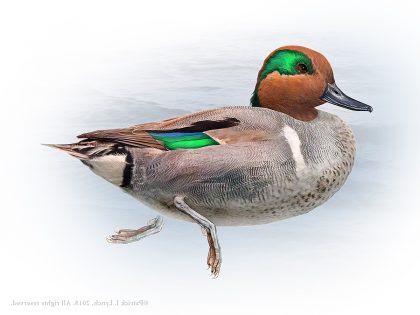 Green-winged Teal is the smallest North American duck, with a length of only 14 inches.

Males and females are plumaged very differently from one another. The striking males pack a lot of color and pattern into their small package. They show a dark rufous head with a broad green patch behind the eye, a buffy breast specked with dark spots, a gray body with an obvious vertical white bar at the side of the breast, and a beige patch on the side of the tail.

Green-winged Teal is found in its greatest numbers in our larger coastal salt marshes. But they can occur in any wetland, inland or coastal, and also may be seen along the open coast or at inland ponds. 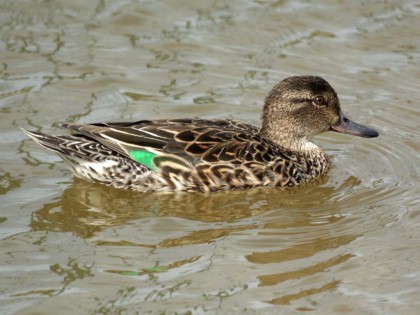 Keep an eye out for: If, while looking through a flock of Green-winged Teal, you notice a male with a long horizontal bar down the bird’s side rather than a short vertical bar at the breast side, you have found a “Eurasian” Green-winged Teal.

A couple of individuals of this subspecies are usually found every March-April in the state. The two forms hybridize, which would be indicated by a bird that has both a vertical and horizontal stripe. Both the “Eurasian” form and their hybrids are rare in these parts.