2021 Migration Madness Birdathon in Review: Exhaustion, Elation, Satisfaction — All in All, a Great Weekend 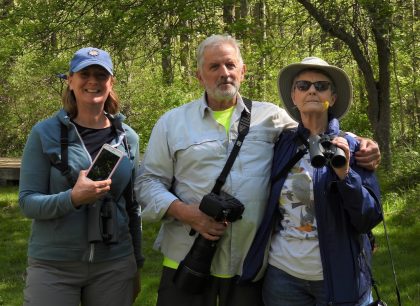 Scroll to see the Prize Winners and Complete Leaderboard for the Fourth Annual Migration Madness Birdathon. Photo contest winners will be announced the week of May 24.

May 23, 2021 — Great weather, dozens of enthusiastic participants, and scores of bird species all made for an amazing 2021 Migration Madness Birdathon.

For some, the weekend of May 14-16 was fun and exhilarating, but exhausting.

Andrew Dasinger, for example, participated almost completely without a car for the second year.

“I ended up with 148 species, with a few frustrating misses, but overall it was very satisfying for a car-free effort,” the South Glastonbury resident said. “One small exception to my no-car rule was on Saturday night, when I drove to the top of Clark Hill for Whip-poor-wills and woodcock.

“I covered about 150 miles on mountain bike and on foot, and took 7 bus trips and 2 ferry rides.”

Tina Green of Westport relied on her car to top Andrew. The 175 species she found put her at the top of the leaderboard for the fourth year in a row. Andrew’s 148 were good for second place.

Next year, she might be looking for help: “Great weekend of birding,” she said. “I hope to have another person with me next year as birding, driving, and doing checklists is crazy!”

Not everybody put in as much effort. But the rewards were just as great.

Families had a wonderful time
Justin McDonough and his 10-year-old son Gabriel; Mekhala Attonito and her children, Pavana and Kalel, 10 and 8; and Amy Galaty and her 10-year-old daughter, Charlotte, for example, each had great experiences as a family.

“We really had a great time doing this together!” Amy Galaty said. “It has helped us appreciate the beautiful wildlife that is all around us. Can’t wait to do this again next year!”

Almost 100 people participated and 72 submitted checklists: Youngsters with their parents, adults at the beginner and intermediate birding levels, and experts who planned their itineraries to check off as many hard-to-find birds as possible.

They saw a total of 207 species of birds, from American Robins and Blue Jays to American Bittern and White-winged Scoter.

The Birdathon raised $19,056 for bird conservation in Connecticut. Well over 200 people participated or made donations.

Thank you to donors and sponsors
To them and to the lead sponsor, Wells Fargo, a big, sincere thank you.

Thank you as well to Keith Mueller for creating the Costa Rican Pygmy Owl that is the event’s grand prize, won in a special random drawing by Linda Olsen of Stratford.

The drawing was open to any adult participants who saw at least 40 species and raised at least $40, and any young birders for saw 25 and raised $25.

And thank you to the other sponsors: Aquarion Water Company, Oak Lawn Cemetery and Arboretum, and Edgerton Inc.

The Migration Madness weekend also included 19 bird walks throughout the state, led by Connecticut Audubon’s experts. Almost 150 people looked for birds in places such as Deer Pond Farm in Sherman, the Larsen Sanctuary in Fairfield, the Bafflin Sanctuary in Pomfret, and various locations in and around Old Lyme near the Roger Tory Peterson Estuary Center.

Among the bird walk participants were Charles and Charlotte Stoeckle, of Shelton, who joined a walk led by Connecticut Audubon’s Stefan Martin.

“My wife and I are novice birders with a lot to learn — and that was excellent,” Charles said.

“SO much fun!”
Jean DiBenedetto of East Hartford, who participated with her husband, Mike, said their highlights were “very unexpected Bobolinks in the South Windsor Meadows, male and female Orchard Orioles, and two life birds–Yellow-throated Vireo and Bay-breasted Warbler.”

She added, “My husband and I have never birded with such intensity before; the end of each birding trip had us racing to the next location for more. By the end of the weekend I was exhausted, with sore feet, a sore neck (so much looking up!), and bleary eyes. But oh, SO much fun!”

Christina Cole of Killingworth, who racked up the third highest number of species, mapped her route in the preceding days and then lugged her camera and heavy lens everywhere she went.

“I’m sore for sure and have jello arms,” she said on Sunday. “I think I’m petering out! But it was fun, and motivating and I learned a lot too!” 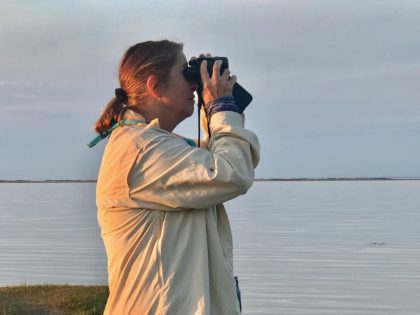 Cindy Wright-Jones of Pomfret at Barn Island during the 2021 Birdathon.

Frank Mantlik of Stratford raised the most money for conservation over the weekend, $1,850. His weekend showed how upper-echelon birders like him can still sometime miss a widespread species.

“I had a blast,” he said. “The most surprising sighting was a flock of 20 (or so) Glossy Ibis flying south over the dam on the Housatonic River in Shelton. I was expecting these large black birds to be Cormorants, but they clearly all had long decurved bills.

“My biggest miss was Eastern Phoebe!”

Don’t forget to check the tide tables
Among the first-time participants was Susan Durant, of Wallingford, who volunteers to monitor an Osprey nest for Connecticut Audubon’s Osprey Nation project.

“This was a first for me and I was pretty excited to participate,” she said. “I thought I’d only see 20 bird varieties, but I got 44 so I was happy. I went to my regular ‘go-to’ spots — the reservoir in Wallingford, Milford Point, and the boat ramp in North Haven. I got some good exercise trekking around Milford Point and I even got my husband involved on Sunday.”

Cindy Wright-Jones, who lives near our Center at Pomfret and Bafflin Sanctuary, started out close to home and then headed south. 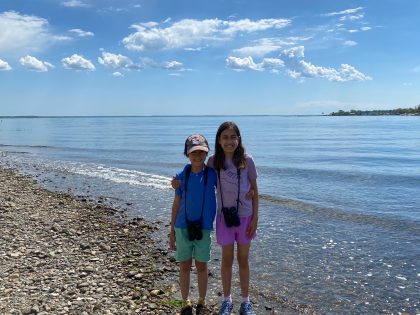 Pavana and Kalel Attonito (10 and 8 years old) at Weed Beach, Darien, during the 2021 Birdathon.

“I finished up at the gorgeous and very peaceful Barn Island Wildlife Management Area in Stonington,” she said. “Note to self – check tide tables to be sure there is at least a little water coming in before visiting an estuary!

“I did see the most enormous gull (Great Black-backed) I had ever seen in my entire life, and two Willets, which I had never seen before. But not a single egret to be had!”

Donna Cupka, a Glastonbury resident who birded with her husband, John, found the weekend to be inspirational.

“After participating in the Migration Madness weekend, we are invigorated and motivated to spot new birds,” she said. “But even more, to raise awareness about providing a healthy wildlife environment.”