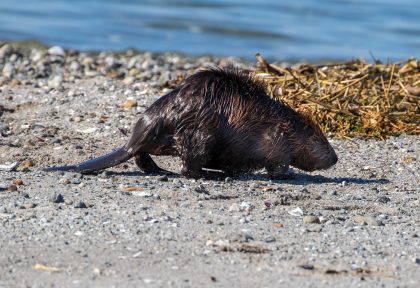 A beaver emerged from the water and walked along the sand at Milford Point over the weekend. Photo by John Hannan.

May 24, 2021 — The beaver pictured here lumbered up onto the beach at the Milford Point Coastal Center over the weekend, presumably after floating or swimming down the Housatonic River.

It undoubtedly wasn’t the first beaver to show up there but it was unusual nonetheless.

In 1613 and 1614, when the Dutch captain Adriaen Block became the first European to sail the length of Long Island Sound, he explored the navigable stretches of every river he found in order to trade for beaver pelts.

When the trade reached its peak, a merchant named William Pynchon shipped six to nine thousand pounds of beaver pelts a year, every year from 1636 to 1652. It made him one of the region’s richest men.

That pace slackened but didn’t stop until the beaver were gone, by 1700.

But Castor canadensis is back now throughout Connecticut, if not always right on the beach.

In fact they’re so numerous that the website of the Connecticut Department of Energy and Environmental Protection “receives hundreds of complaints about beaver damage each year. This number is expected to increase as beaver populations continue to grow and human development encroaches on suitable habitat.”

As for the beaver on the beach, it was soon gone, no doubt eager to get home.