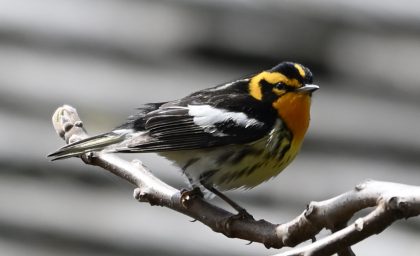 by Andy Griswold. Photo and videos by Gilles Carter.
May 11, 2021 — One of the most strikingly colored of our wood-warblers, this species’ flaming orange throat was responsible for its colloquial name of “Fire Throat.”

With yellow and black on its neck and face, black wings with a large fused white wing bar, and black streaks on a yellow to white belly, the male is unique among our North American warblers. Females are a muted version of the male, showing two narrower wing bars.

This bird was named after Anna Blackburne, an English botanist in the 1700s.

Where to find it: This species has made a good showing in Connecticut so far this spring. Connecticut Audubon Society’s Birdcraft Sanctuary in Fairfield is always a good place for warblers, as is our Center at Pomfret and the adjacent Bafflin Sanctuary. Other places such as East Rock in New Haven and park land with mature trees would be a good spot to look as well.

Blackburnians are likely to be around on Friday, Saturday and Sunday, so you can expect to include them on your Migration Madness Birdathon list.

Blackburnian Warbler breeds in mature coniferous and mixed coniferous/deciduous forests. In migration look for this bird in almost any taller flowering tree, usually fairly high up but not always. It often sings from the highest tree tops.

With songbird migration continuing, look for all those other migrant species passing through including Northern Parula, Tennessee Warbler, Cape May Warbler, Bay-breasted Warbler, Mourning Warbler, and Blackpoll Warbler. Of course you will likely find many of our nesting warbler species and should always keep in mind that southern vagrants like Kentucky, Prothonotary, and Swainson’s Warbler are possible.

Conservation status: Populations are considered stable with an estimated global breeding population of about 10 million. An individual recorded as the oldest banding recapture was at least eight years and two months old.