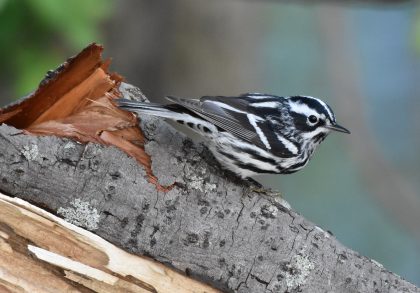 by Jim Arrigoni
Videos and photos by Gilles Carter
May 6, 2021 — Although every warbler species is unique, the Black-and-white Warbler stands out, and for a variety of reasons.

Many warblers exhibit bright and flashy colors, but the aptly named Black-and-white Warbler is just that: black and white. Yet it is far from drab: the ornate and contrasting striped pattern conjures the exotic pattern of a zebra.

Males and females are similar, although the black cheek marking is much bolder on mature males.

Without all those distinctive stripes, the Black-and-white Warbler might be confused with the familiar White-breasted Nuthatch, and in fact, these two species share a common foraging behavior. More than any other warbler species, the Black-and-white will glean invertebrates from large limbs and the trunks of trees, sometimes even moving down the surface headfirst just like a nuthatch.

Black-and-White Warblers are common enough that they will be on most checklists submitted for the 2021 Migration Madness Birdathon. So keep your eyes and ears open (hearing a bird counts just as much as seeing one in the Birdathon).

Learning the calls of warblers can be intimidating, but the repetitive teetse-teetse-teetse-teetse of the Black-and-white Warbler is relatively easy to recognize, and is rarely confused with other species: imagine a squeaking spinning wheel or a pulley that needs a shot of oil. 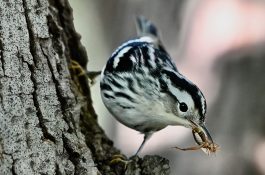 The species can be encountered in forested areas throughout the state, with a preference for larger forest blocks and later successional stages. If you are especially observant, you may encounter its well-concealed nest on the ground next to a log or tree, or on the surface of a tree stump.

Unlike many other Neotropical migrant songbirds, the conservation status of Black-and-white Warbler is considered to be secure and “least concern.”

There is evidence for a slight decline in Connecticut over the past half-century, but this is balanced by increases observed elsewhere.

In addition to its stylish appearance, one of my favorite things about this bird is that it is one of the only species that I have ever gotten to respond to my pishing!

Gilles Carter is a member of Connecticut Audubon’s Board of Directors.