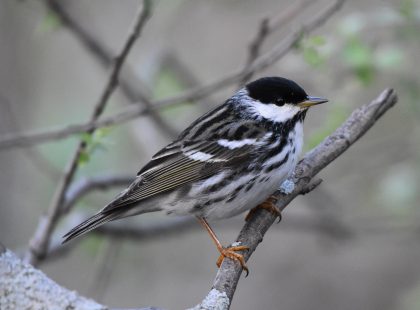 by Joe Attwater
May 19, 2021 — Though Blackpoll Warblers are fairly common in Connecticut, we are likely to see them only in spring and fall migrations, when they are among the last warblers to migrate. They don’t breed in the state or most of New England, and nest further north than any other warbler species.

Listen for their high-pitched song, which can reach 10,000 Hz, and is often difficult to pick out from the chorus of spring birds.

Blackpoll Warblers are one of the most incredible songbirds that travel through Connecticut. In the fall, this half-ounce bird makes the longest over-water journey of any songbird, travelling 1,800 miles over the Atlantic Ocean to reach its wintering grounds in Puerto Rico and South America.

Though not the most colorful warbler, the Blackpoll nonetheless has striking black and white plumage, with the males being more boldly patterned. They have a dark cap (or “poll,” the top of the head) and white cheeks, with black streaks down the flanks.

Their bright orange feet help to distinguish them from other warblers, especially during fall migration. The closest species in appearance is the Black-and-white Warbler, which has a striped cap and white cheeks, and spotted undertail coverts.

Where to find it: During migration, look for Blackpoll Warblers in scrubby habitats, forest edges and mature forests, but also parks and gardens. They will pick insects from the leaves of trees, and often forage near the trunks of evergreen trees. 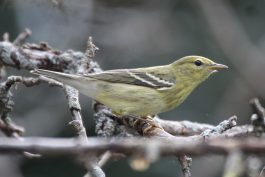 They breed in Canada’s boreal forests, and in wet areas with evergreen trees in Northern New England.

Since they breed so far north much of their range is out of the area covered by the North American Breeding Bird Survey, making it difficult to determine their populations.

The boreal forests in which they breed have also been threatened by logging and expansion of industry. Their long-distance migration also puts them at risk for hazards such as collisions and bad weather.