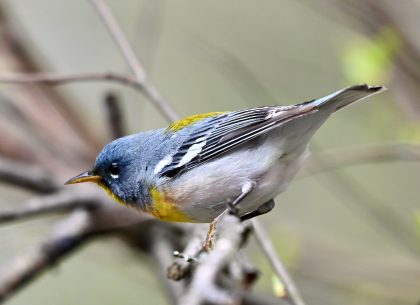 We’ll text them to you, if you fill out the form at the bottom of this page.

by Patrick Comins, Executive Director of the Connecticut Audubon Society
May 4, 2021 — The Northern Parula is a regular migrant through Connecticut from late April through May. Since it does nest regionally it can show up well into June as they sort out nesting territories. Most often they seem to select riparian habitat for nesting attempts.

They are one of our most common and widespread migrants and can be found almost anywhere in the state in migration. I  just had one singing from my very spartan urban backyard last week.

Their distinctive song — a high pitched, buzzy series of incremental rises in pitch with a quick decrease in pitch at the end — is very helpful in locating these tiny warblers.

They are regular at our Birdcraft Sanctuary in Fairfield throughout much of May, and can be found really at any of our sanctuaries that are open to the public at that time. But the small size of Birdcraft often allows for better viewing of warblers than most other places in the state.

Birdcraft and our other sanctuaries are great places to participate in our upcoming Migration Madness Birdathon.

Male parulas sport a blue-gray back with a greenish-yellow patch on the back. The throat is yellow, above a black and brown breast band. Females, which lack the breast markings, tend to migrate later than males, but are often overlooked because they do not sing. Both male and female have white crescents above and below the eye.

Parulas also occur in fall migration, when they can be much more drab in appearance and generally don’t sing. The peak of their fall migration is from early September to mid October.  They occasionally can be found later into the fall and even rarely in the winter. 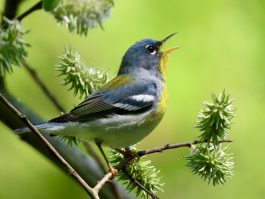 The greenish yellow patch on their back is often a good clue as to their identity, but that, plus the combination of a yellow throat, wing bars, tiny size and pale eye arcs, make even the drabbest fall juveniles readily identifiable.

Birdcraft, the Milford Point Coastal Center, and the Smith Richardson preserve in Westport are prime places to find parulas in fall migration, but they can occur anywhere, including your pollinator garden.

Northern Parula was once one of the most common nesting birds in Connecticut. One swamp in Norwich alone was noted as hosting 30 breeding pairs in the late 19th Century. They were entirely extirpated as nesters in the first half of the 20th Century. It has been hypothesized that air pollution may have impacted the lichens they require to build their nests.

However, they appear to be colonizing the state again as a nesting species and it will be interesting to see if the Connecticut Bird Atlas is able to confirm their nesting in Connecticut.