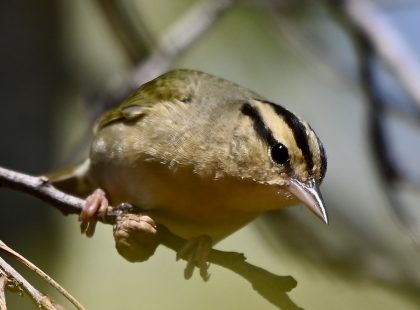 By Christopher S. Wood
May 12, 2021 — I was first introduced to the wood warblers while banding birds with Noble Proctor at East Rock Park back in the mid 1970’s.

One of my earliest (recognizable) bird photos was of Noble holding a Worm-eating Warbler and since then, like most of us, I’ve been smitten by the songs, colors, habits, and variety exhibited by this family of birds.

Worm-eating Warblers are not the fanciest of warblers: their colors are drab brown (“caramel,” according to David Sibley) to blend in with their habitat, and their song is a simple trill.

Perhaps their main attraction is their affiliation with the dark and deep woods of our state and the challenge they pose in trying to get a good look at one. They are known for their feeding habits of hopping through the understory and picking insects from hanging dead leaves.

During migration, look for them at any of the typical warbler stopovers, such as Connecticut Audubon’s Birdcraft Sanctuary in Fairfield and East Rock Park in New Haven. They should be on everyone’s watch list for thhis weekend’s Migration Madness Birdathon.

Identification Although Worm-eating Warblers bear some resemblance to the waterthrushes and to Swainson’s Warbler, they are in a separate genus, Helmitheros — in fact the sole representative of that genus. Once seen well, they are unlikely to be confused with any other expected species in Connecticut. The trick is, of course, seeing one well.

More often Worm-eating Warblers are identified by their song, although this, too, poses a field ID challenge.

The simple trill of a Worm-eating Warbler is quite similar to the songs of the Pine Warbler and the Chipping Sparrow, both of which may occur in adjoining or overlapping habitats. The former may usually be ruled out by its strict affiliation with pine trees, and almost always high up on them.

The latter may be more problematic: I once spent some time tracking down what I was sure was a Worm-eating Warbler, deep in the woods, only to come across a proudly territorial Chipping Sparrow.

With practice, however, the faster pace and drier trill of the Worm-eating Warbler, combined with the habitat, allow for confirmed identification. 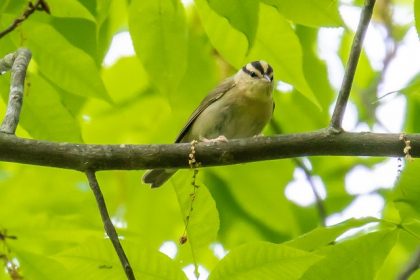 According to the Birds of the WorldOnline account, “The species is considered area sensitive and nests in highest densities in forests of at least several hundred hectares.”

Nest sites are on the ground, typically on steep slopes or ravine banks.

In the lower southwest corner, a reliable spot is The Nature Conservancy’s Devil’s Den Preserve, where this species has been closely studied since 1991. Flanders Land Trust’s Whittemore Sanctuary in Woodbury is a relatively accessible location for finding this bird.

Despite the benefits of reforestation noted above, continuing fragmentation of woodlands in Connecticut may eventually reduce the available habitat.