The country’s most important bird protection law is safe, thanks to a vast grassroots advocacy effort 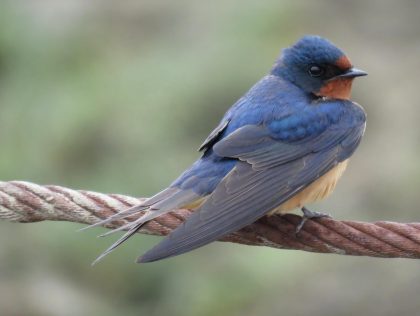 Under the restored rules, it will be no longer be legal to destroy nests and kill birds, such as Barn Swallows. Photo by Patrick Comins.

May 27, 2021 — Thanks to a nationwide grassroots advocacy effort that included members of the Connecticut Audubon Society, the long-standing protections of the country’s most important bird protection law will remain intact.

The U.S. Fish and Wildlife Service announced recently that it was revoking changes made in 2018 that weakened the Migratory Bird Treaty Act.

The changes made it legal for people or businesses to harm or kill birds as long as they didn’t do it intentionally.

For example, the owner of a barn with nesting Barn Swallows could demolish the barn and destroy the nests, and would not be subject to penalties as long as it was not the owner’s intent to harm the birds.

This was bad policy. It is very difficult to prove intent in a court of law. The changes would have made the law virtually unenforceable.

Those protections had been in place since the law was enacted more than a century ago. The changes prompted legal action and an outpouring of protest from conservation groups and bird advocates.

Connecticut Audubon’s members and advocates were a big part of that. Consistently in recent years, including most recently in March, they sent messages to the Department of the Interior and to their representatives in Washington urging them to make sure that the law remained strong.

The messages sent in March will all be considered as part of the current public comment period.

In all, Connecticut Audubon’s grassroots advocacy network sent almost 1,300 messages to Washington D.C. on the issue.

Now, with the law about to be fully restored, bird protections that had been effective since 1918 will still be in place.

It is a major positive step for bird protection.

Thank you to all the Connecticut Audubon advocates who spoke out on the issue!