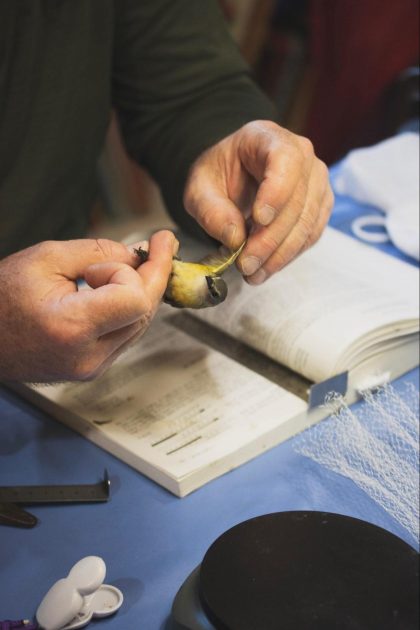 A bander at Birdcraft checks an American Redstart on May 11. “Oh my God, Judy, I’ve got chills — I have to sit down.”

In the Sanctuaries …
June 16, 2021 — A visitor arrived last month at Birdcraft Sanctuary in Fairfield bearing a message from afar. That alone would have been amazing.

But the message turned out to be personal, in a way — and an incredible coincidence that left the sender and the receivers with chills.

The visitor was an American Redstart, a warbler that migrates between its North American nesting grounds and its wintering territory far to the south.

This particular redstart, a female, had an identification band around its leg. Leg bands are issued by the U.S. Geological Service and attached by licensed banders throughout the U.S. and beyond; each has a unique number that identifies the bird and the place it was banded.

If the bands are retrieved later, they provide valuable information about migration, lifespan, and more.

Bands can be retrieved in several ways, including by catching birds in harmless nets. That’s how the Birdcraft team does it.

On May 11, when they caught the American Redstart, they knew right away that its band had been attached elsewhere.

It’s not uncommon for the Birdcraft banders to retrieve bands that they themselves had attached in a previous season or year. But Judy Richardson, who has been banding at Birdcraft since 1988, said that only a minuscule fraction of the birds they catch are wearing a band attached elsewhere.

So that alone was amazing.

As Judy and the other Birdcraft banders — including Patty Scott and Michael Corcoran — were soon to realize, the amazing was about to become the incredible.

Judy, Patty and Michael also travel to Costa Rica to band birds on their wintering grounds, including as part of a group led by Steve Latta, a PhD ornithologist who is director of conservation and field research at the National Aviary in Pittsburgh. They’ve been working together since 2004 and have become close friends. 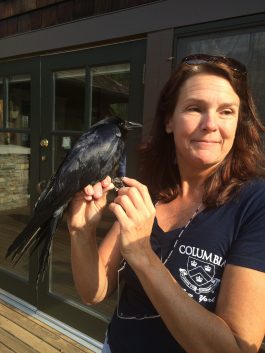 Steve also bands birds in the Dominican Republic. Which is where the story takes on its once-a-millennium dimensions.

When the redstart showed up at Birdcraft on May 11, the team there sent its band numbers to the USGS. They did this so the agency can add the data to its records. The USGS also emails the details to both the bander and the person who found the band.

It took a while for the USGS to respond. Judy had assumed the redstart had been banded relatively nearby. When she finally heard back, in early June, she was unprepared for the message.

The female American Redstart had been banded in February.

“I called Patty and said, ‘Are you sitting down?’ I said, ‘Guess what? That bird was banded by Steve Latta in the Dominican Republic!’

The redstart banded in February by their friend Steve Latta had not merely flown north for 1,570 miles across the Atlantic. That alone is both amazing and unremarkable — millions of birds do it every year.

But it sought rest and food at exactly the place where Judy, Patti, and Michael band birds. And it did so at a time when the mist nets were open.

What are the odds?

Hard to say except that it definitely has never happened before at Birdcraft. Steve called it “uniquely thrilling.”

“Every banding record results in the collection of some useful data,” he said, “but records like this one are off-the-charts valuable to science and conservation!” — Tom Andersen, Communications Director