Anglers and bird lovers: your help needed to spread the word about fishing line recycling 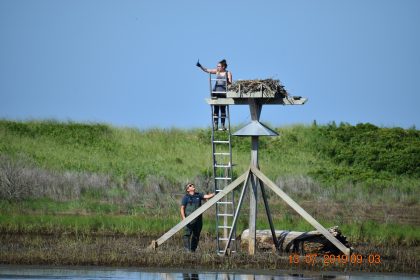 In July 2019, Melina Giantomidis, who was then the coordinator of Connecticut Audubon’s Osprey Nation program, got help from her father to remove monofilament fishing line from an Osprey nest in Waterford. Similar efforts won’t be needed if more people recycle their fishing line. Photo by Nancy James.

June 21, 2021  — Your help is needed to get out the word about a serious hazard to local wildlife – especially if you love to fish.

Discarded monofilament fishing line is dangerous to birds, fish and other wildlife, which can easily be injured, strangled or killed by line caught on piers, branches, and bushes. Fishing line also imperils swimmers and damages propellers and outboard motors.

Two years ago the Connecticut Audubon Society sponsored a program to build and install 20 outdoor fishing line recycling bins made of PVC pipe. These were placed at shore-side locations in Fairfield and Bridgeport in order to get the monofilament line out of the environment.

The project is off to a good start, but information about the recycling bins needs to reach more people.

Volunteers are needed to help get this material into the hands of anglers. If you would like to volunteer, contact project coordinator Madeline Dennis Raleigh at madelineraleigh@optonline.net.

Milan Bull, Connecticut Audubon’s senior director of science and conservation, and himself a long-time fisherman, said reports continue to come in of animals imperiled by improperly discarded fishing line .

“We want people to enjoy fishing,” he said, “but for this to be a successful project, we’d like to see the recycling bins filled over and over again with line to be recycled.”

Connecticut Audubon also has a recycling bin at its Milford Point Coastal Center.

Click here for a list of all the fishing line recycle bins throughout the state (compiled by the Connecticut Department of Energy and Environmental Protection).

Click here for an interactive map of the locations of all the bins in Connecticut Audubon’s project.

A recycling bin in Fairfield.

Monofilament cannot be recycled with town recycling collections; it should never be thrown in the trash.

Volunteers monitor the bins and empty them when needed. The collected fishing line is packaged and shipped to Berkley Fishing — the only place in the county that properly recycles it, turns it into pellets and makes it into tackle boxes and underwater fish habitats.

The consequences of discarded fishing line can be dramatic and unfortunate. In August 2018 on Ash Creek in Fairfield, for example, an Osprey caught in fishing line dangled from its nest in the middle of a marsh. A rescue team reached it but the bird did not survive.

“Unfortunately many fishermen are still not aware that their line needs to be recycled in a special way,” Project Coordinator Madeline Dennis Raleigh said. “Although we see lots of fishing going on, some bins just are not full of line.  So we recently have started phase two of our project with an education program reaching out to the fisherman to inform them. “

Original funding for the project was provided by  the Ash Creek Conservation Association,in Black Rock provided the funding. The bins were built by Fairfield high schools students and installed by the venues.

Gail Robinson, president of the Ash Creek Conservation Association, said, “We could use a few good volunteers to help get the word out about the importance of properly getting rid of their discarded line.

“I happened to be involved in that attempted rescue of the Osprey on Ash Creek on 2018, and it was not a scene that I want to see repeated.“