Something is killing birds to the south. Taking in your bird feeders now might help to keep it from spreading. 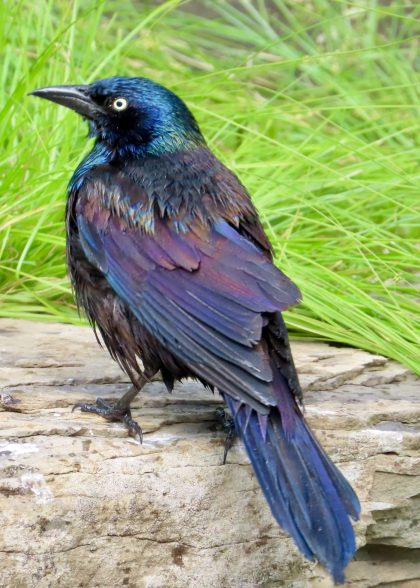 This Common Grackle was healthy when it was photographed but grackles are among the species afflicted by an unknown ailment that has been killing birds further south. Photo by Patrick Comins.

July 6, 2021 — An unknown affliction has been killing songbirds in southern, mid-Atlantic states, and mid-west states. Although it seems as if it hasn’t reached Connecticut yet, it’s time to take precautions.

The Connecticut Audubon Society has been monitoring reports and consulting with other experts. They’ve all agreed on a few simple things to do.

Whatever is killing birds might be infectious, so we recommend that you stop feeding birds for the time being.

The birds won’t suffer if you take your feeders down — there’s plenty of wild food available at this time of year. And you can put them back up either when it’s clear that the problem won’t show up here or when it’s over.

Connecticut Audubon will be following the issue closely and will keep you informed of the latest developments and advice.

Here are five precautionary steps to take that might help slow the progress of the affliction or keep it from spreading if it arrives here.

We will be taking down feeders at our centers. We will be monitoring birds that visit the two large water features — at the Milford Point Coastal Center and at Birdcraft Sanctuary in Fairfield — and will take appropriate steps if we see birds showing symptoms or if the affliction is confirmed in Connecticut.

Unusual numbers of dead birds were first reported in Washington D.C, Maryland, Virginia, West Virginia and Kentucky in May. Since then, there have been reports from Delaware, New Jersey, Pennsylvania, Ohio and Indiana.

Many of the birds have been immatures, with swollen eyes and crusty discharges.

The Connecticut Department of Energy and Environmental Protection advises that if you see a live bird with these symptoms, don’t try to capture it. Contact a wildlife rehabilitator instead.

If you find a dead bird with crusty eyes, take photos and keep track of the date and location. Then double bag it and discard it in the normal trash stream, taking care not to touch it and not to allow pets to get near it.

Dead birds can be reported to the CT DEEP database.