Here’s how to help birds while your feeders are down 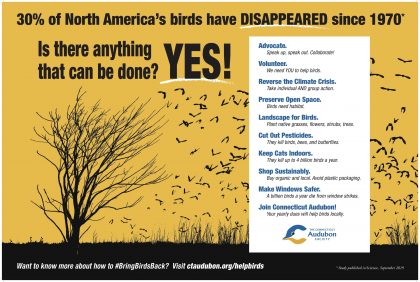 August 7, 2021 – The mysterious condition that has been killing birds seems to have reached Connecticut. As of late July, state veterinary pathologists tested three birds and all three showed symptoms similar to those seen in dead birds from other states.

One of the best things you can do for birds right now is to take down your bird feeder. Or if you’ve already taken it down, leave it down. Hummingbird feeders and bird baths included.

The condition and its cause remains unknown. The symptoms are mainly swollen or cloudy eyes, eyes and crusty discharges from the eyes. Because it might be infectious, the prudent thing to do is to limit the number of places where birds gather close together.

That won’t be a burden for birds because there’s plenty of wild food and water available.

There are other ways to help birds though. Here’s a list of actions we compiled in 2020.

Working together is an effective way of bringing about changes that will help birds. Photo by Michael Audette.

2. Volunteer
We have two state-wide projects that directly benefit birds and also rely on volunteers – Osprey Nation and the Audubon Alliance for Coastal Waterbirds.

Look here for information about whom to contact at our seven centers. 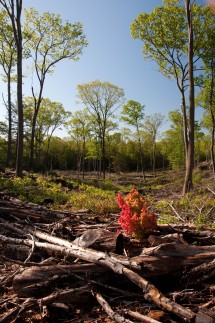 The bottom line for birds is habitat. They need suitable places to nest, spend the winter, and rest and feed during migration.

It’s critical to support the buying, preserving, and managing open space, including forest land, on the state and local level.

Strategic acquisition can improve Connecticut’s big forest tracts. A recent study by Bird Conservation Research, based in Pomfret, indicates that since 1985 the number of birds in 10,000 acres of forest in Union, Connecticut, has actually increased.

The researchers conclude that large, unbroken forests in southern New England might be serving as refuges for birds whose populations are falling elsewhere.

This underscores that conservation isn’t something that is needed in distant lands. Healthy habitats in your towns and cities make a difference.

In addition, preserving forests and grasslands locks up carbon in plants and trees to keep it out of the atmosphere. 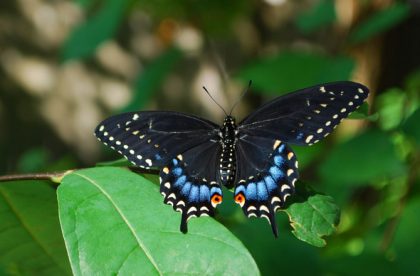