Osprey Nation 2021 Report: Reasons to celebrate, including lots of Ospreys 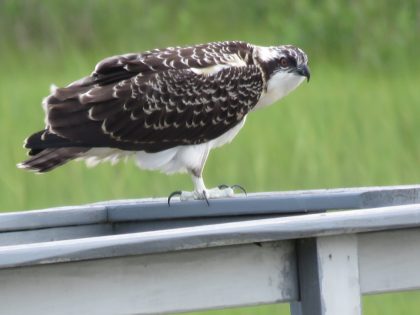 November 22, 2021 — Ospreys continue to thrive in Connecticut. That’s a success story worth celebrating for more reasons than one.

It’s worth celebrating for the birds themselves. These large, fish-eating raptors were pushed to the brink of extinction 50 years ago because of the pesticide DDT. Their comeback began in 1972, when DDT was banned in the U.S.

But then Ospreys got additional help. People all along the coast in Connecticut (and elsewhere) began raising platforms in tidal marshes and along bays and rivers to provide places for Ospreys to nest. Their success is another reason to celebrate.

And there’s a third reason: we know many of the details of the Osprey revival because, since 2014, more than 700 people have volunteered for Connecticut Audubon’s Osprey Nation project.

Those volunteers have watched nests and faithfully submitted data, culminating in 2021.

We’re releasing the Osprey Nation report for the 2021 season today. It shows that this year, 342 volunteer stewards submitted data on 814 nests.

Of those nests, 558 were active. The 558 pairs of Ospreys that occupied those nests produced 858 fledglings.

Both numbers are by far the highest since the project began.

It’s a testimony to the resilience of the birds; to the obvious fact that if you stop polluting the environment, good things will happen; and to the dedication of hundreds of people in Connecticut and beyond.