Great Island, Old Lyme, on the lower Connecticut River, which is part of the National Estuarine Research Reserve. Photo by Bob MacDonnell.

The new reserve is the first in Connecticut. It covers about 52,000 acres in and around the lower Connecticut and Thames Rivers.

The project has been in the works for decades and was formalized today by the U.S. Department of Commerce on the recommendation of the National Atmospheric and Oceanic Administration.

The purpose of the reserve is to provide a focus to keep the estuary ecologically healthy; to serve as a site for research to aid conservation; to provide information to local officials and others who make decisions affecting the area; and to provide outdoor education for students.

View maps of the Reserve here.

As much as $1 million a year will be earmarked for the reserve, to be used by scientists engaged in researching issues such as climate resiliency, water quality, habitat quality, and fish and wildlife.

The reserve will also be a source of funding, materials, and field trip locations for local education programs such as Connecticut Audubon’s Science in Nature, which has reached more than 75,000 school children in Connecticut and has thrived particularly in Old Lyme and New London, the heart of the estuarine reserve area. 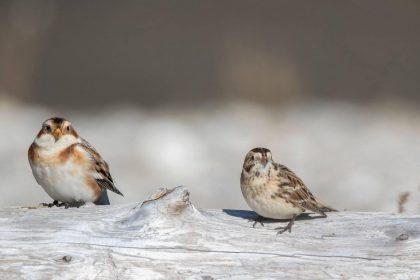 A Snow Bunting, left, with a Lapland Longspur. The species are often found together on beaches in winter in the estuarine research reserve. Photo by Christina Cole.

NOAA oversees the system. The Connecticut Department of Energy and Environmental Protection, the University of Connecticut and Connecticut Sea Grant will be the primary state partners, and will be guided by a 338-page management plan.

In addition, Connecticut Audubon has worked closely with the Pew Charitable Trust’s Conserving Marine Life in the U.S. project to build public support for the reserve.

“Connecticut’s first national estuarine research reserve will enable the state to contribute meaningfully to scientific research into how to best counter sea-level rise and climate change,” Patrick Comins, executive director of the Connecticut Audubon Society, said. “It will also provide a substantial economic and recreational boost to the area, which will benefit all residents.”

The National Estuarine Research Reserve System, established by Congress in the early 1970s, is a growing network of sensitive coastal areas across more than 1.3 million acres now in 24 states and Puerto Rico. 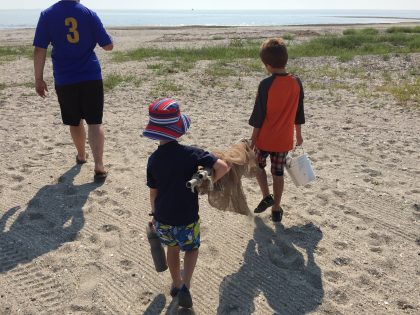 A goal of the National Estuarine Research Reserve is to make it easier for people to find places to enjoy the water for activities that are compatible with good environmental stewardship.

An estuary is an arm of the sea, where fresh water from rivers mixes with salt water from the sea. Estuaries are among the most productive ecosystems on the planet. They also play an important role in coastal economies, and serve as buffers from storms and sea level rise.

More than 200 species of bird rely on those areas for migratory stopovers, overwintering and nesting — almost a quarter of which are protected under the Connecticut Endangered Species Act.