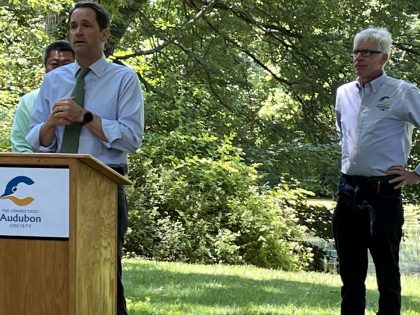 June 23, 2022 — The U.S. House of Representatives has passed the Recovering America’s Wildlife Act. The bill authorizes $1.3 billion to be distributed each year to help states carry out their federally-mandated wildlife action plans, which are designed to help protect birds and other wildlife.

Connecticut would receive almost $12 million a year, to be administered by the state Department of Energy and Environmental Protection.

Considered one of the most important pieces of conservation legislation in decades, the bill is now before the U.S. Senate.

U.S. Representative Jim Himes announced the passage of the bill, known as RAWA, at a press conference on Monday, June 20, at Connecticut Audubon’s Center at Fairfield.

You can read about the importance of the bill in this op-ed by Connecticut Audubon Executive Director Patrick Comins, published in May 2022 by the Hearst CT news chain; and in this previous webpost.